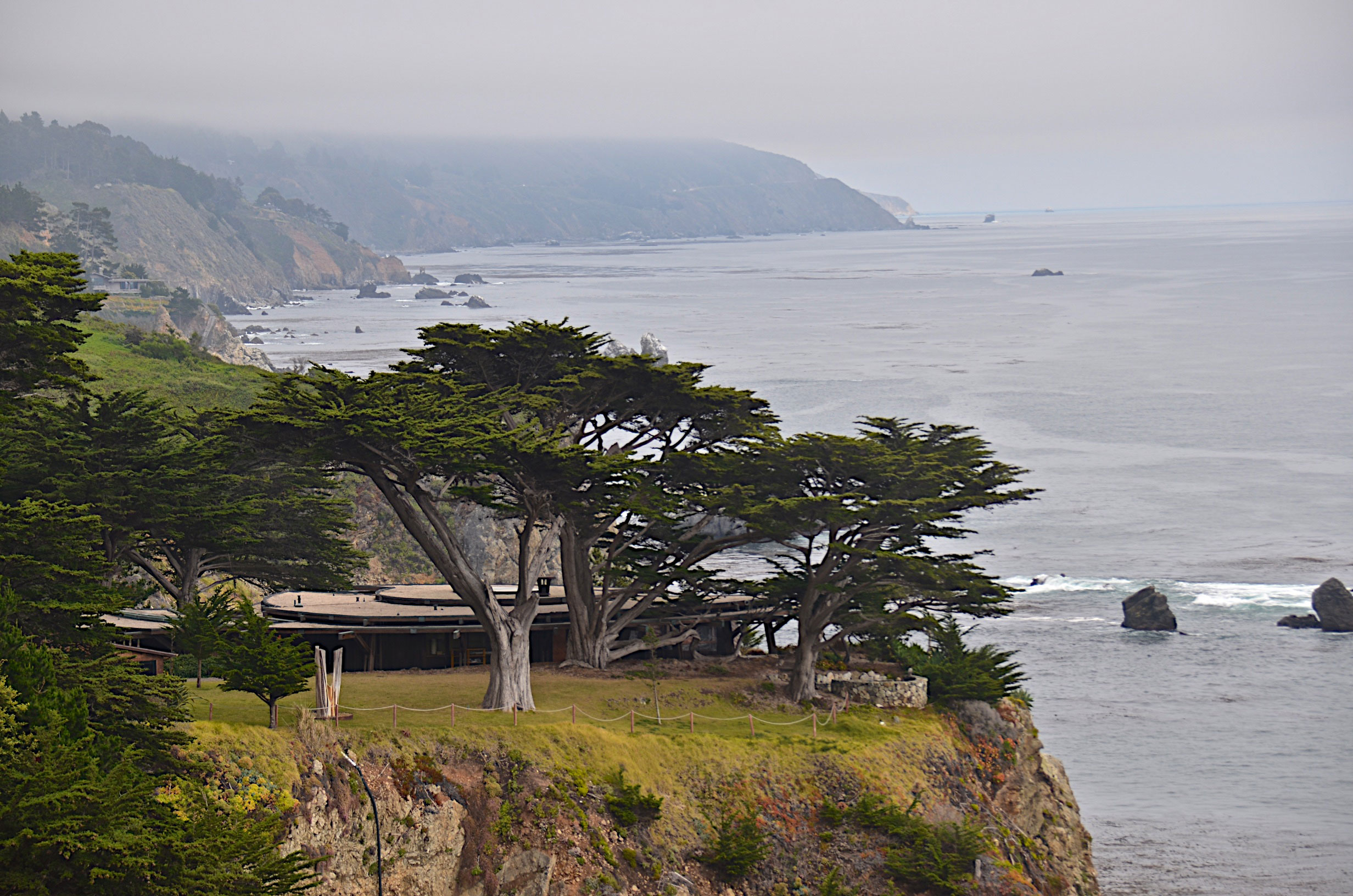 After a brief stay in San Francisco we left in the morning heading south towards our destination in central California. For this part of the trip we wanted to stay off Route 101 as it veers inland south of San Francisco and instead decided to take Ca. 1, a state road winding along the coast passing through smaller communities and providing spectacular ocean views. I had driven through some of it before and had a few stops in mind for this journey. We’ll see how they go.

We took the wide and straight Geary Blvd. going west from downtown San Fran to the coast, about a 20 minutes drive. From there we turned south on Ca. 1 and we were on our way. 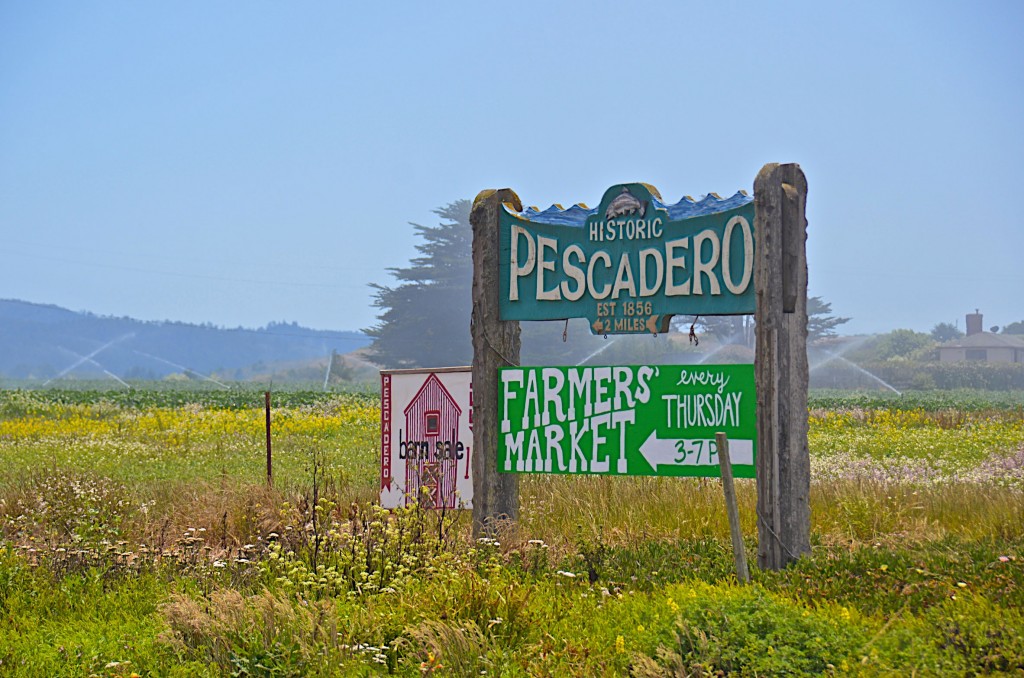 The first stop was Pescadero, a tiny one street community situated 50 miles south of San Francisco and 2 km east of the highway. A sign on the highway marks the exit, watch for it on your left or you’d miss it. Pescadero is a small farming community growing fava beans and brussels sprouts. It is also home to a goat cheese farm with award winning cheeses. It has one main street called Stage Road, a church at the end and a few small homes with lovely gardens in the front. That’s about it, but Pescadero is world renowned and gets more than its share of visitors.

Pescadero is known as the home to the world famous Duarte restaurant located on the main Stage road. Duarte is a fourth generation family operation, in business since the 1920’s. In spite of the global reputation and onslaught of visitors, Duarte is still truly local with farmers stopping by for coffee in the morning and workers walk over to the restaurant from their nearby homes. Behind the restaurant there is a vegetable garden where the Duartes grow the vegetables, herbs and berries that they use in the kitchen. They are especially known for the artichoke soup, cooked from an old family recipe and for local olallieberies pie. I have never heard of olallieberries, they are wild berries that grow locally and have a sweet and tangy flavour. The Duartes used to grow their own artichokes for the restaurant in the back yard but due to the large demand by constant stream of visitors they now bring the artichokes from nearby farms (it’s artichoke country over there). 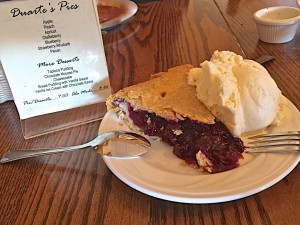 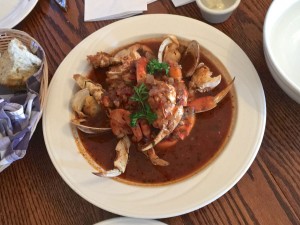 They are also know for their cioppino, a local fish stew in thick broth that you sop up with their home made bread.

We were there early and got a table right away, but within a few minutes the tables were all occupied and a line formed outside. We settled at a table close to the kitchen and ordered fresh artichoke hearts with homemade aioli, artichoke soup and a ciopino. Everything was so fresh and delicious and so unexpected at such a remote little place. It’s hard to get fresh artichokes even in big city restaurants and in season. The artichoke soup was tangy and creamy, the artichokes with aioli were buttery and delicious (such a treat) and the fragrant ciopino reminded you of the nearby ocean. That pie was absolutely flawless, flakey crust, wonderful berry filling done perfectly without any gooey texture and the homemade ice cream an ideal compliment. We savoured the flavours, aromas and sights at this little place and on the way out I bought a few jams, syrups and vinaigrettes they make in-house with the special olallieberries. I plan to stop here again on the way back.

After lunch we walked outside and I needed to check out the bakery-grocery shop across the street, Arcangeli Grocery Co. If you were expecting a small country shop it’s not what you get. A sophisticated store with expensive California wines from Napa valley ($150 and up), wonderful local preserves, specialty pastas, artisan breads and piles of fresh artichokes, this store could fit anywhere. Of course my head was spinning and I stocked up on more olallieberries products and a few other things I could justify buying without having a kitchen for the next two weeks. My resistance is very low in a place like this. Those artichokes, just think of all I could make with them. 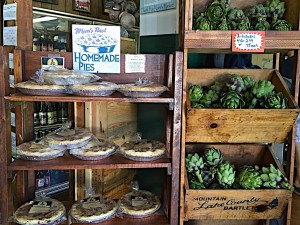 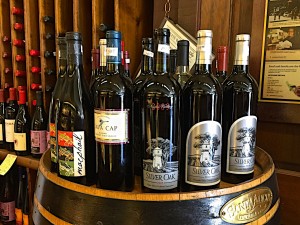 Reluctantly, we had to keep going, so we got back in the Hummer and on to the highway going south. Once we passed Pescadero it became artichoke country with fields of farmed artichokes on both sides of the road. This was late for artichoke season but apparently because of the weather the plants were not performing as well and it stretched the season into June. There were farmers stands along the way with signs “10 artichokes for a dollar” and offering fried artichokes at roadside stands. We are going to stop for these on the way back. We just had to keep going. Mind you, I would have stopped at each of these stands coming and going but I was trying not to impose too much of my foodie addiction on G.

The next stop was going to be Carmel-by-the Sea, that beautiful town known for it’s celebrity citizen and once mayor “go ahead, make my day” Clint Eastwood. I had a list of restaurants in Carmel and was hoping to have another lunch there if we could manage it, or at least a drive along the beach if we were too full to eat. As it happened Carmel was shrouded in fog when we got there so we decided to keep going and stop there on the way back. Needless to say we were not hungry.

Once you pass Carmel the road becomes a little scary. It climbs high up on the cliffs above the ocean with barely a few inches between the pavement and the drop to the rocky shore far below. I am not afraid of heights but being a passenger and not in control of the vehicle was not very comfortable and I had to keep my eyes on the road. In one section the road was closed because of erosion along the steep cliffs. I tried to take a couple of pictures that would capture the sense of driving on this road but not sure I succeeded. Stunning, rugged scenery and sharp turns made the drive scary. Gorgeous homes are built into the cliffs along the way and the views from these homes must be very special. I put it on my “must rent” list. 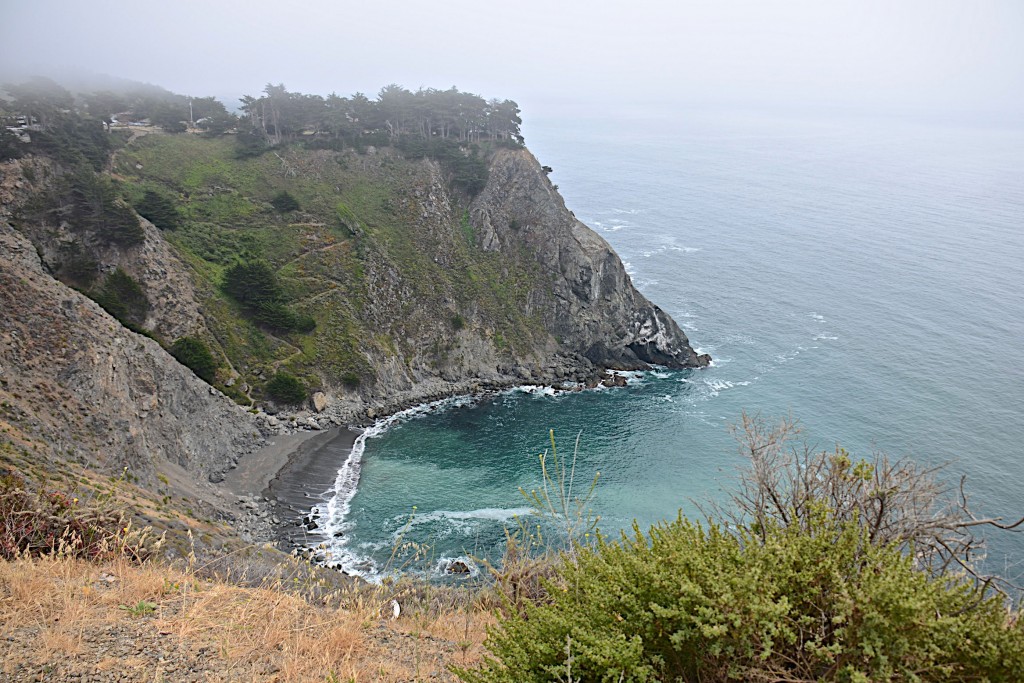 Once we passed Carmel the next destination was Nepenthe at Big Sur. Legend has it that Orson Wells bought the property on top of the hill and had a beautiful, secluded love nest built there for his beloved Ava Gardner. Nepenthe means something that will make you forget your sorrows, Kind of a romantic notion. As the story goes, they never lived there and in time the place was sold and became a restaurant. Well, not so fast.

Nepenthe is a multi level property perched on top of the hill above the ocean. The restaurant, being at high elevation, was above the clouds and sunny, but everything below was shrouded in fog, so no view today. The large patio had an outdoor fireplace and several tables and umbrellas and a built-in sitting area with colourful cushions. Inside there was a large vaulted ceiling room with windows all around in which the restaurant was housed. If it wasn’t for the story that goes with the place we could have kept on driving. As it was, we settled at a table, ordered a couple of appetizers and started reading the back of the menu about the history of the place. Orson Wells’s name was not even mentioned. The property is owned by a family who used to live there and now owns and operates the restaurant and shop on the premises. On further inquiry we heard that Orson Wells bought a small cabin on the property and eventually sold it to the current owners. Not as romantic as it originally sounded. I can’t comment on the view because we didn’t see it but over all it was not a memorable experience. 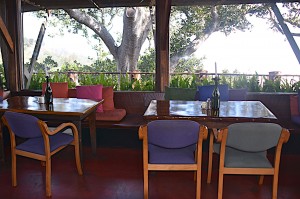 From there we continued south and eventually (e-ven-tu-a-lly) the nerve wrecking road descended back to sea level and I could take a breath.

The next stop was just below the Hurst Castle to see the sea lions lying on the beach at sunset tossing sand over themselves with their relatively small flippers. There were hundreds of them on the beach, quite a sight. We were there at a perfect time as they are mostly in the water during the day.

The Hurst Castle in only 30 miles away from our destination at Paso Robles so we plan to drive back there in the next couple fo days. At the moment we were anxious to get there and check into the hotel.

In Paso Robles we stayed at the Bellaserra hotel in an apartment-size suite furnished like a home. No complains about the hotel but you know, it’s on the highway near a strip mall, not a beautiful setting. Tomorrow we will connect with family and we look forward to the event at Cass Winery. 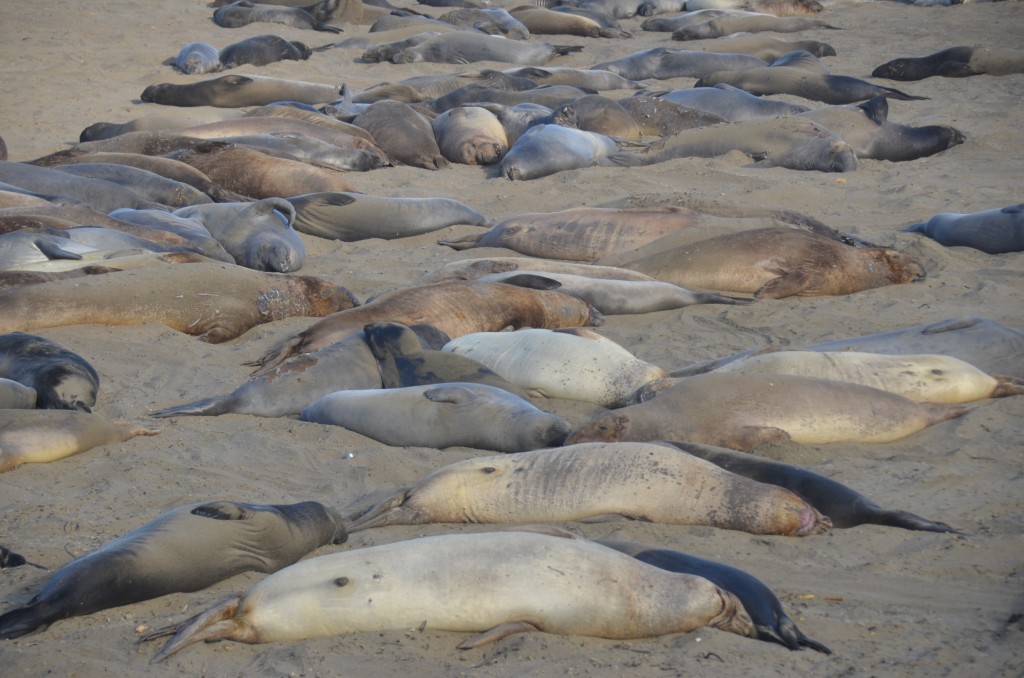 Sea lions on the beach below the Hurst Castle 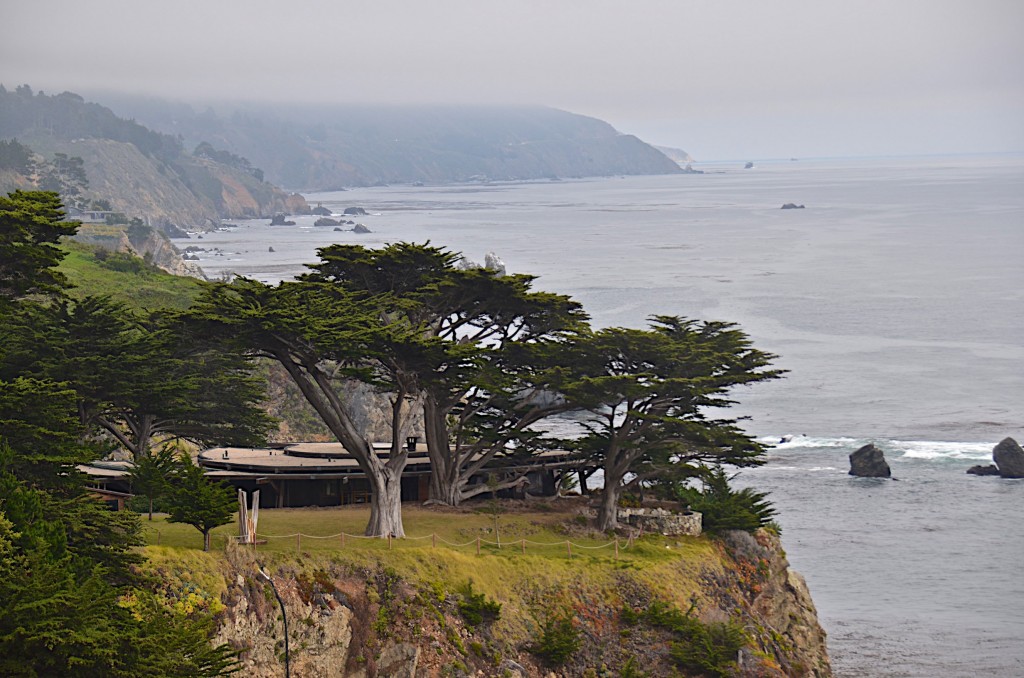 Living on the edge along Ca-1