This week I seem to be making foods that I don’t usually prepare. It’s nice to get out of the routine and make something new. Take this recipe. I use a lot of asparagus in the spring but tend to cook it simply, either steam, cook it in a skillet, roast in the oven or cook on a grill. As all recipes seem to happen, I took the asparagus out of the fridge to grill it in a ridged pan on top of the gas stove but started thinking of perhaps doing something different and combine it with the puff pastry I bought the other day at a local pastry shop (Sandrine, if you are in this area). I thought it would make a nice lunch or a light supper for my husband who was working on his beloved Isa Lei. Asparagus tart with a salad and a glass of vin blanc, sounded pretty good.

When I was learning how to cook years ago I tried my hand at making puff pastry with reasonable success. It was a fun challenge (emphasis on challenge) but once I got “reasonable” at it I kind of gave it up in favour of buying prepared puff pastry from specialty pastry shops that make it with butter. It’s not something I use often but I do have my sources for good puff pastry just in case. Here it happens to be a French pastry shop owned and run by Sandrine after which the pastry shop is named. Sandrine is a French woman (yes, with all the chic that goes with it) and our foodie “group” here have taken classes at her shop recently (macaroons). At Sandrine you can pick up a small roll of puff pastry made entirely with butter and rolled into a small convenient cylinder. You can defrost it in the fridge or on the counter for a limited amount of time. My pastry roll was in the fridge as I was going to use it to make some tarts but change of plans – it’s going to be an asparagus tart. 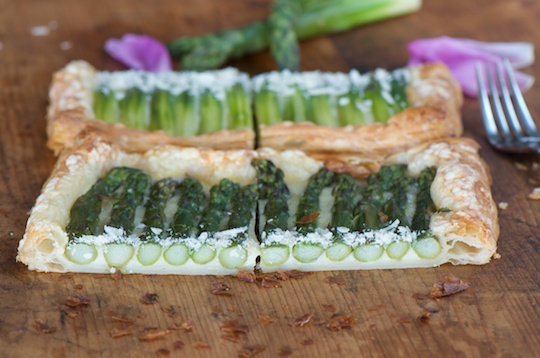 I kept the tart very simple. Grated swiss emmentaler mixed with gruyer and a little parmesan (that’s what I had in the fridge) were to go under the asparagus and be flavoured simply with salt and pepper. I was considering some creme fraiche but decided no, keep it simple. The asparagus was organic and quite beautiful, not too thin, not too fat, just right. I decided to peel the bottom of the spears for the visual effect. The asparagus had to be cooked when I put it on top of the uncooked pastry so I cooked it in a skillet in a little bit of water until crisp tender.

Assembly was pretty simple with the prepared pastry. I sprinkle the cheese over the pastry, layed the cooked asparagus side by side on top of the cheese, trimmed the edges of the pastry and off into a preheated 400 F oven it went. I had to watch it carefully because pastry can go from good to burnt in seconds. The weight of the asparagus kept the centre of the pastry from rising and allowed the edges to puff up. It was nice and crisp throughout and Captain G. enjoyed his light supper.

My herb garden on the patio is starting to show some life and the chives amazingly are fully grown and beginning to bloom. I bought a bunch of herbs for a photography class assignment so it feels like spring is finally here.  I have a couple of large globe artichokes in the fridge waiting their turn. Artichokes is a spring ritual that I never miss. Will keep you posted.

12 asparagus spears or as needed

Defrost the puff pastry in the fridge or for a short time on the counter (it should not get warm).

Cut off the root ends of the spears.

Lay each spear on the cutting board and with a vegetable peeler peel off the skin from the bottom of each spear, about 1/3 of the way up. Work horizontally with the cutting surface to avoid breaking the spears as you peel them.

Bring a large skillet with about 1 inch of water to a boil. Add the asparagus and continue to boil until the spears are crisp tender. Do not overcook as they will continue to cook in the oven.

When the asparagus is ready remove from the water and rinse with cold water or plunge into an ice water bath to stop the cooking.

Roll the pastry open (or unfold it) into a rectangle that would fit the size of your asparagus. Place on a baking sheet lined with foil or parchment. Mine was about 10X12 but size is flexible and depends on the size of your pastry and asparagus.

Sprinkle the cheese over the center of the pastry where the asparagus would be placed.

Place the asparagus spears over the cheese leaving 1 1/2 inch border around all sides. You can lay the asparagus all the same way or alternate top and bottom if you’d like.

Trim the pastry so there is an evenly width of edges all around.

Sprinkle with salt and pepper.

Bake in a preheated 400 F oven watching carefully and turning the sheet around for equal browning.

When the pastry is puffed around the asparagus and feels crisp all aroiund remove from the oven.

Let rest for a few minutes before serving.

To serve cut in quarters. Serve 2 quarters per person. 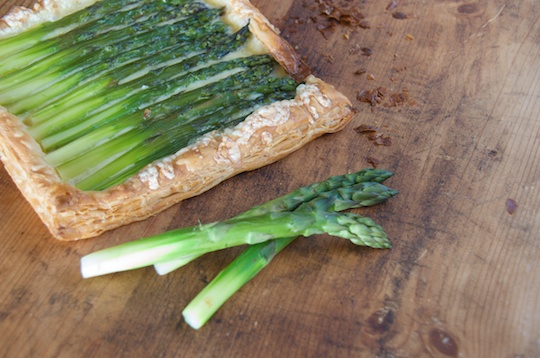 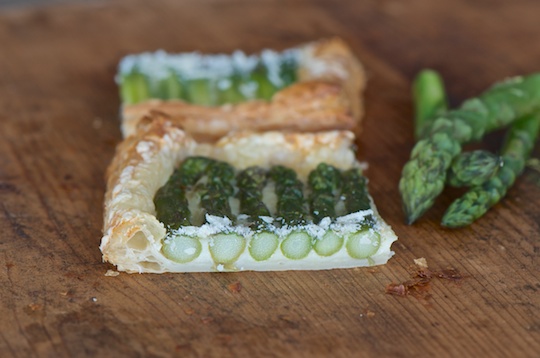