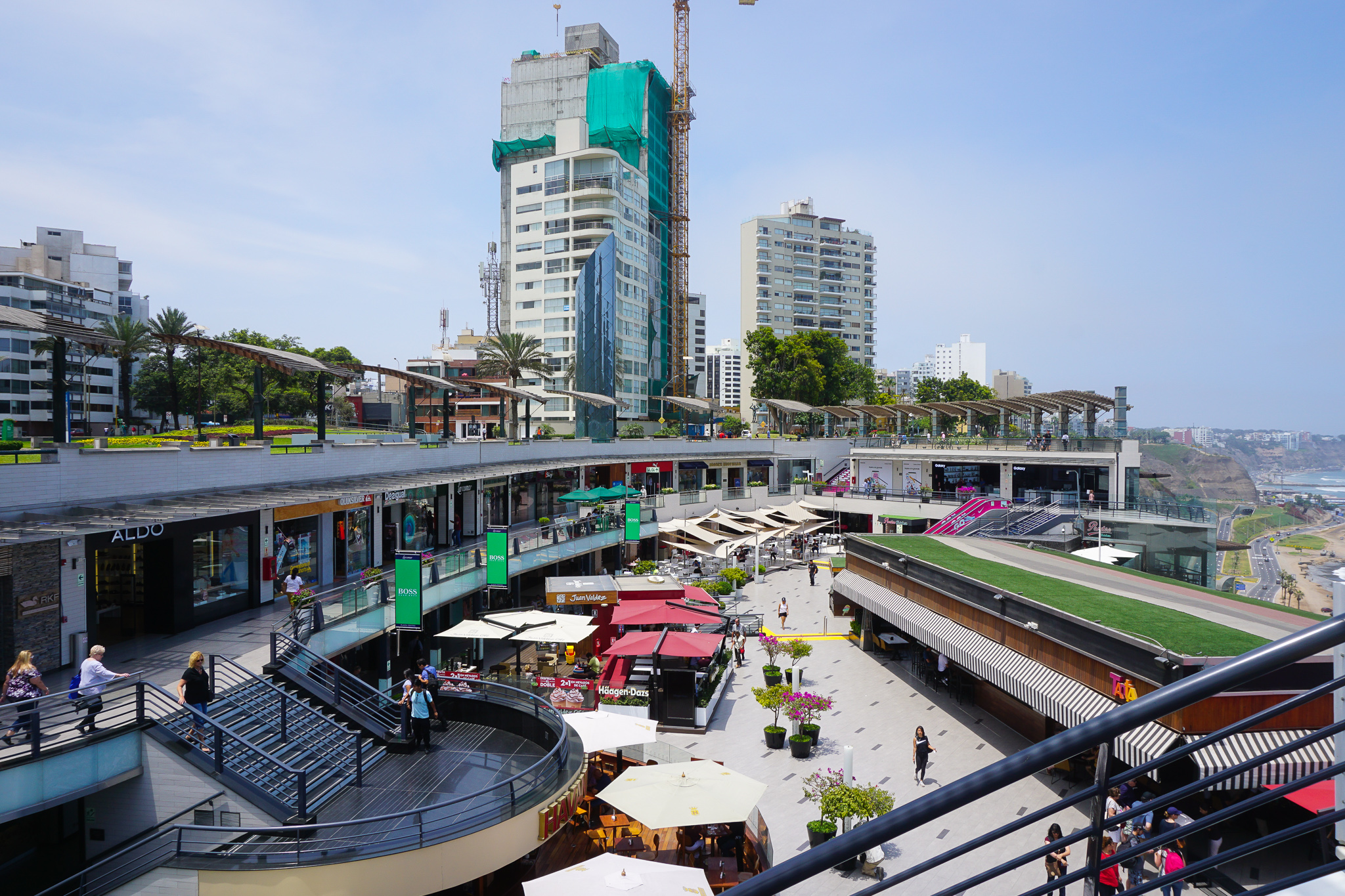 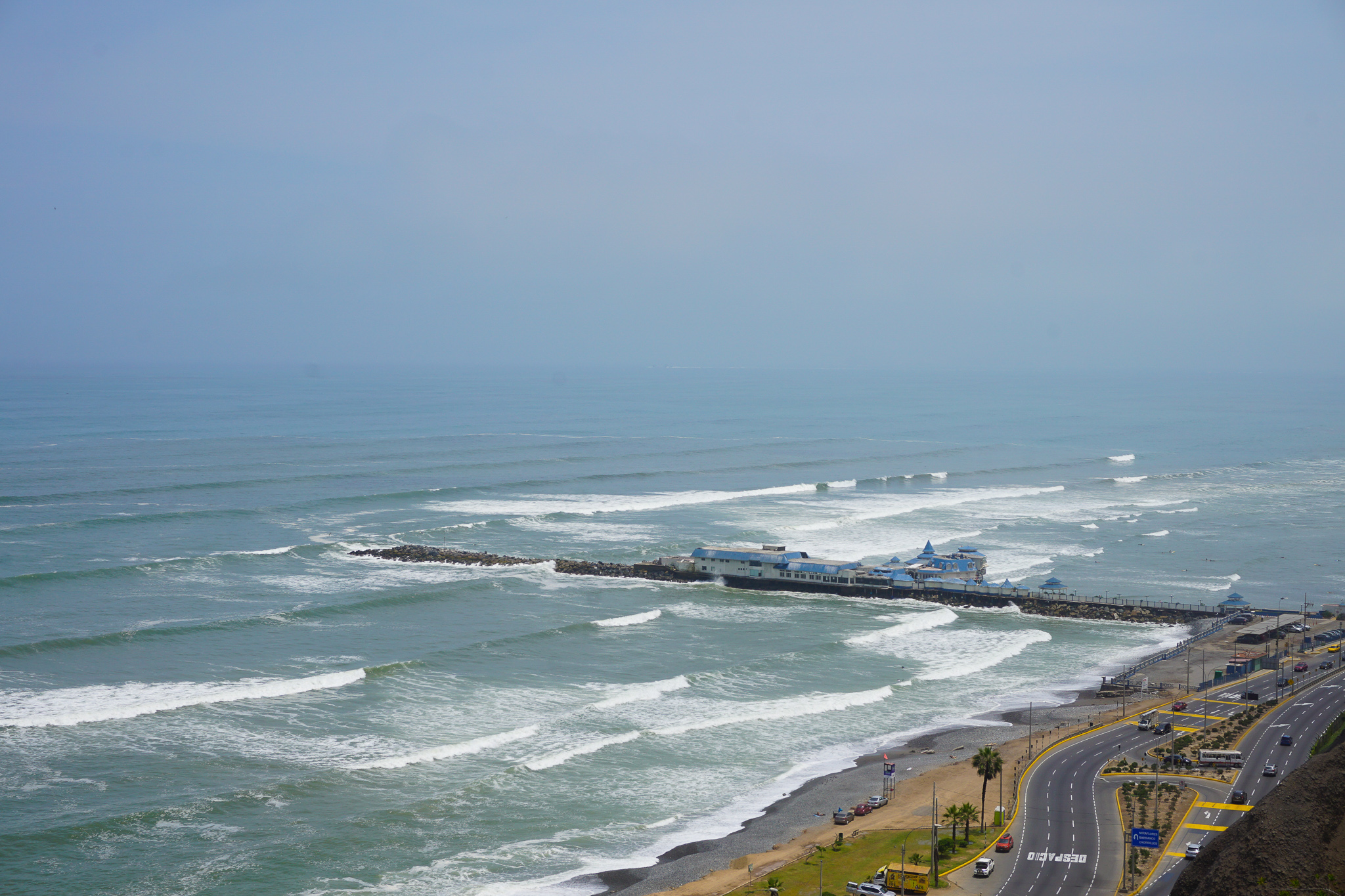 Peru is situated on  the west coast of South America between Chile and Ecuador. Its has a diverse landscape that includes rugged mountains, beaches, desert, sand dunes and lush river valleys. It is best know for Machu Pichu, a reminder of its Inca heritage and the Nazca lines of mysterious origin depicting large illustrations of birds and plants spread over 300 miles in the desert in south Peru. The Peruvian culture reflects its ancient Andean heritage and Spanish colonialism through its customs, architecture and food.

After a less than satisfactory excursion through the ship in Santiago, Chile, we decided to “do” Lima on our own. Since Lima is far from the port the cruise line offered a free shuttle that was going to run all day to and from a certain location not far from Milaflores, the new district of Lima. That location “happened” to be Plaza Salavery, surprise surprise, a large and modern mall about an hour and a half from port. We figured we can use the shuttle to go from the ship to Lima and back and get around Lima on our own. The ship was staying in port for the night to accommodate those who paid the $3,500 usd per person (give or take) to see Machu Pichu. We opted out of this expensive excursion as I plan to make a separate trip to Peru and the Galapagos and spend more time exploring. This stop was just for a day and I wanted to get a sense of the place. In any event, we did not have to rush back as the ship was not leaving until the next morning. 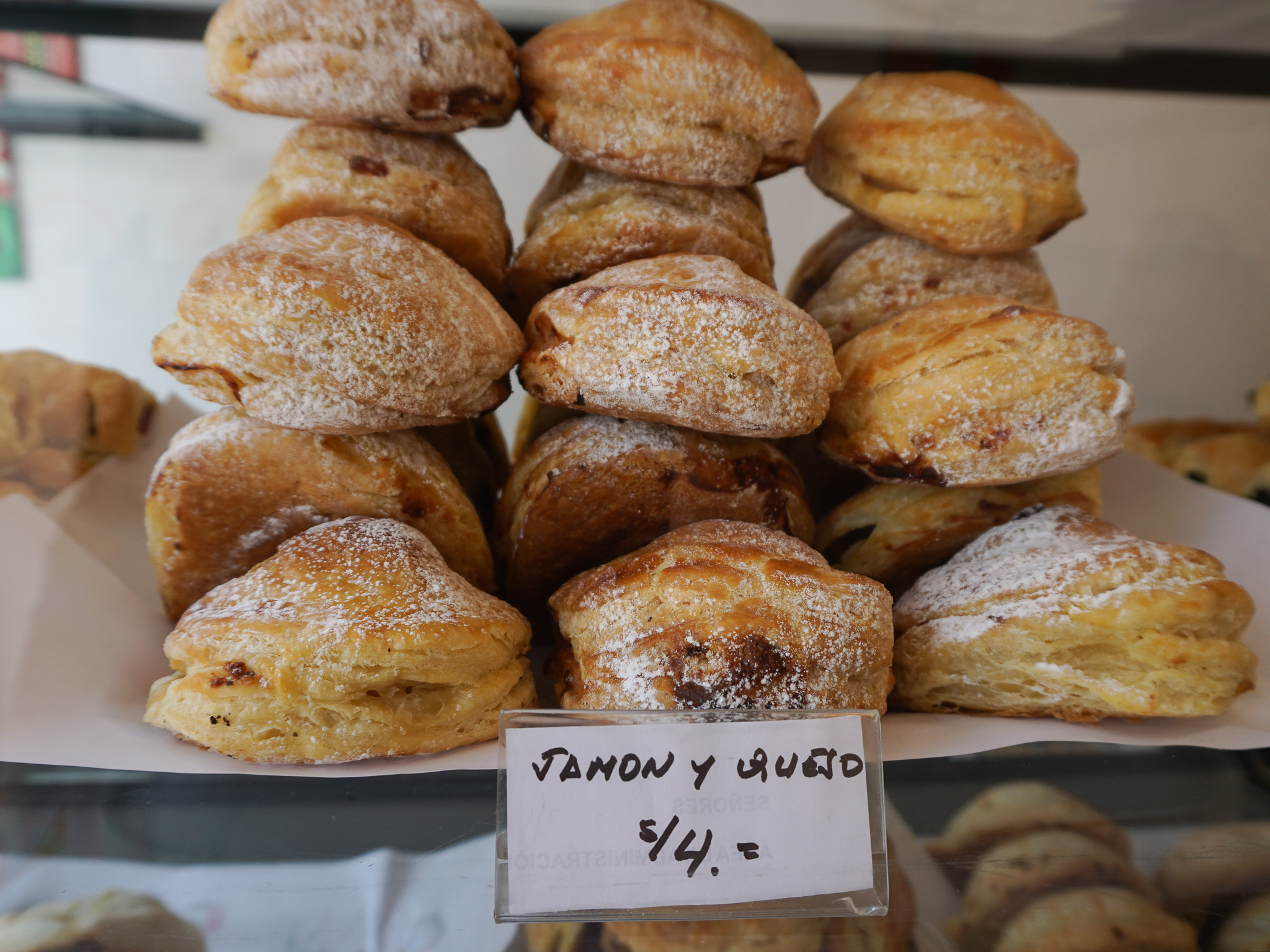 We took the bus and arrived at that mall where dozens of taxi drivers and tour operators were standing, waiting for the cruise crowd to be dropped off and hoping for business. We decided to go into the mall and take a look and perhaps have a cup of coffee and figure out how to proceed. The mall was interesting, with more shoe stores than I have ever seen, everything super modern and not particularly local with mid-market international brands everywhere. After checking it out (and not buying anything although I was tempted) we settled at a cafe with coffee and empanadas for a few minutes to watch the going on. 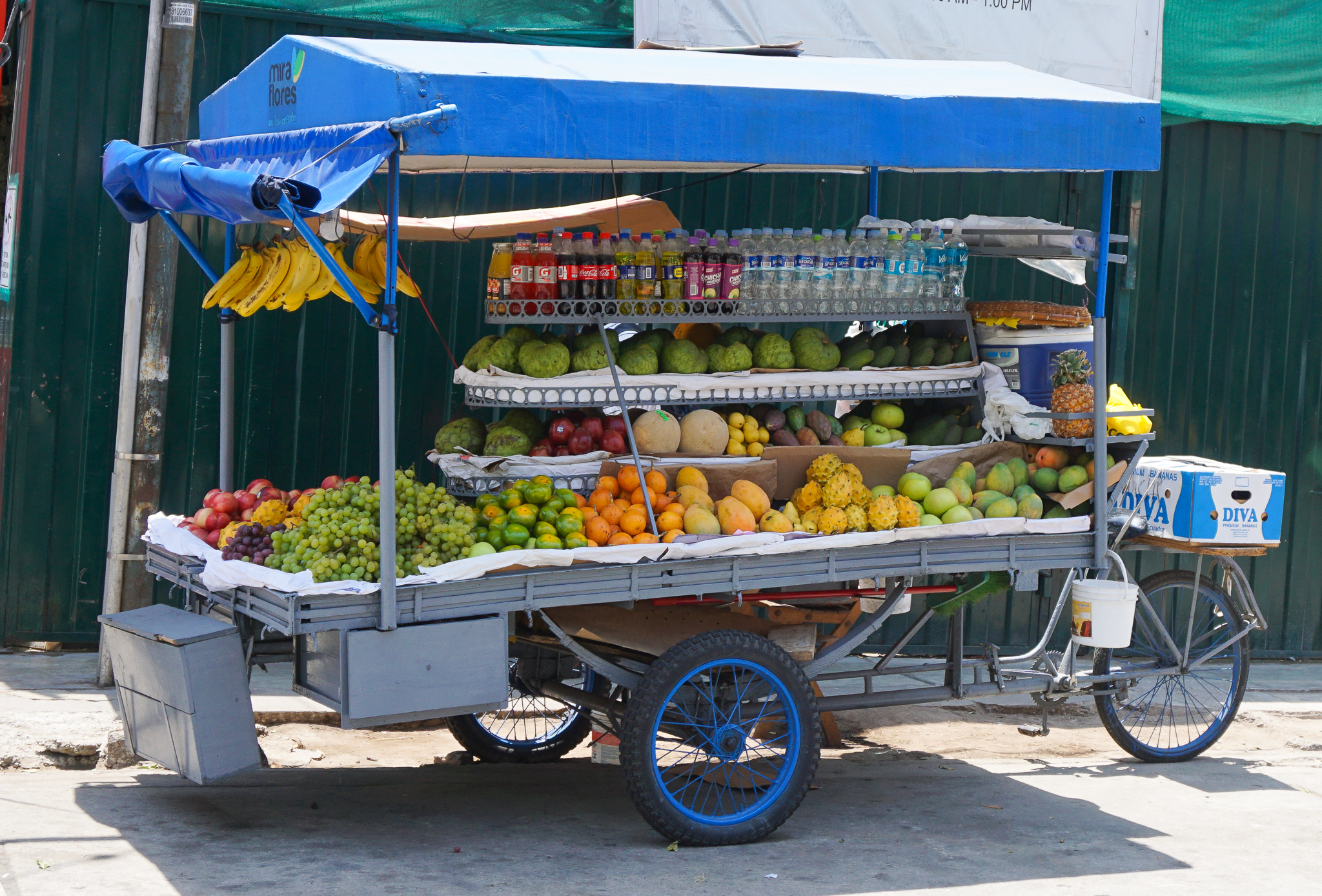 Since we were close to Milaflores we decided to start exploring it first and soon went outside to get a taxi to take us there. The tourist rush was over by then and the drivers and tour guides dispersed. We picked a taxi that had the correct red marking and license number painted on the side of the vehicle (a lot of car owners without a license offer rides but we were not comfortable with that). We agreed on a price before we left and after a 20 minutes drive partly along the beautiful coast he dropped us off at Milaflores near Parque Central. The place was busy, with people, cars, shops and local looking restaurants all mingling in pleasant chaos. We decided to walk to Larcomar on the cliffs over the beach, a modern outdoor center known for good restaurants, spectacular views, modern architecture and overall upscale setting. We loved walking down the broad Avenida Jose Larco towards our destination, everything had a unique flavour, the weather was perfect and we enjoyed the 20 minute walk towards the cliffs. 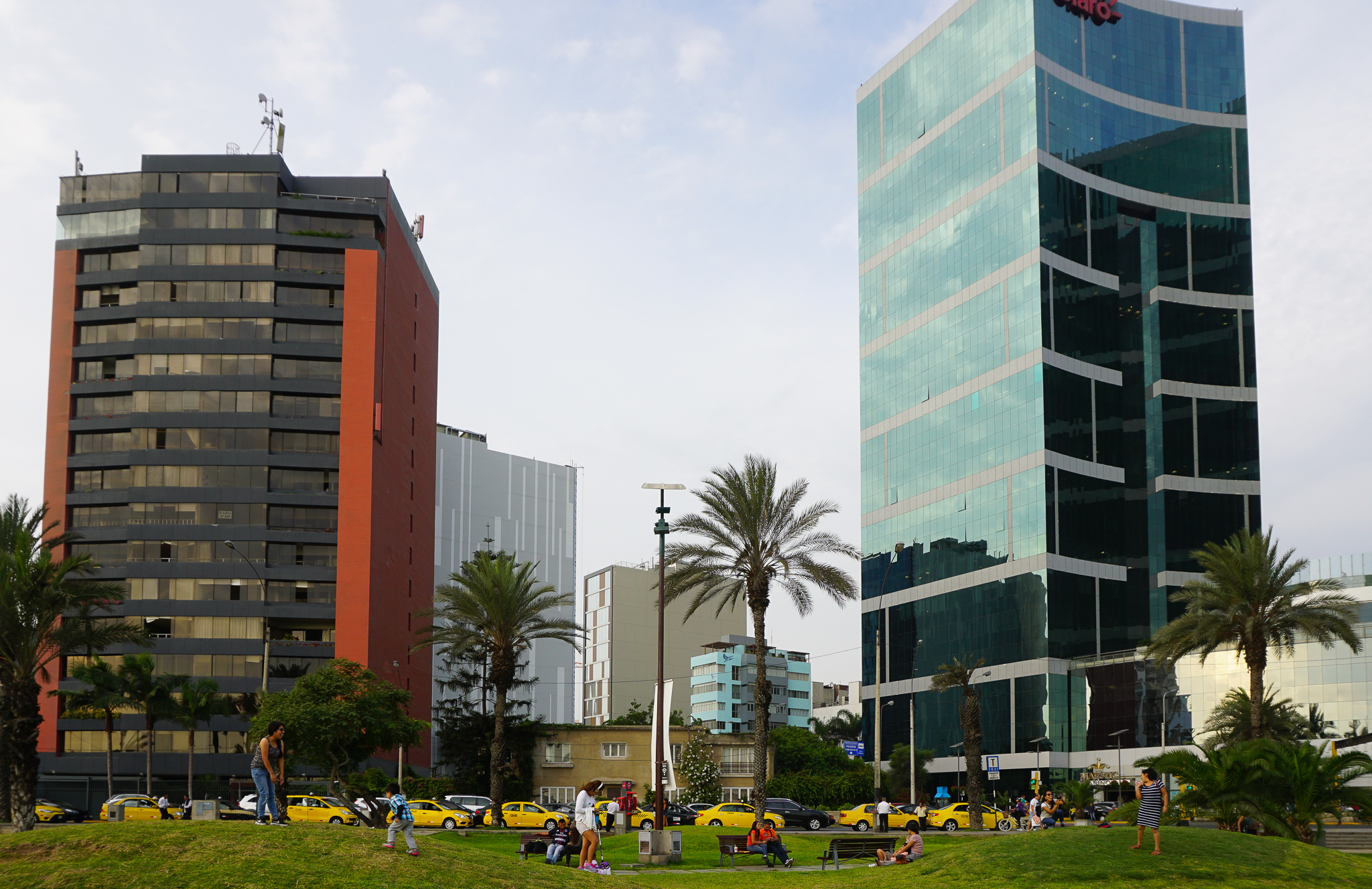 Once you arrive at Larcomar you know you are in an upscale neighbourhood right away. The district has high end hotels, restaurants, shopping and green spaces. The Milaflores Boardwalk stretches up for 6 miles along the cliffs and offers stunning views of the pacific coast with a number of parks along the way. One of the best known is Parque del Amor, distinguished by the El Beso sculpture of two lovers in an embrace, by Peruvian artist Victor Delfin.

Across from the upscale J.W Marriott hotel there is a viewing platform that looks over Larcomar, the multi level open air shopping area with restaurants and shops, built on the side of the cliffs cascading down and facing the gorgeous view over the pacific. It’s quite a sight and I planned to go back there early evening to watch the sunset from one of the restaurants situated at the edge. We walked around for a while enjoying the unique setting, bought some alpaca wool products (shawls, what else?) and absorbed the atmosphere of the place. 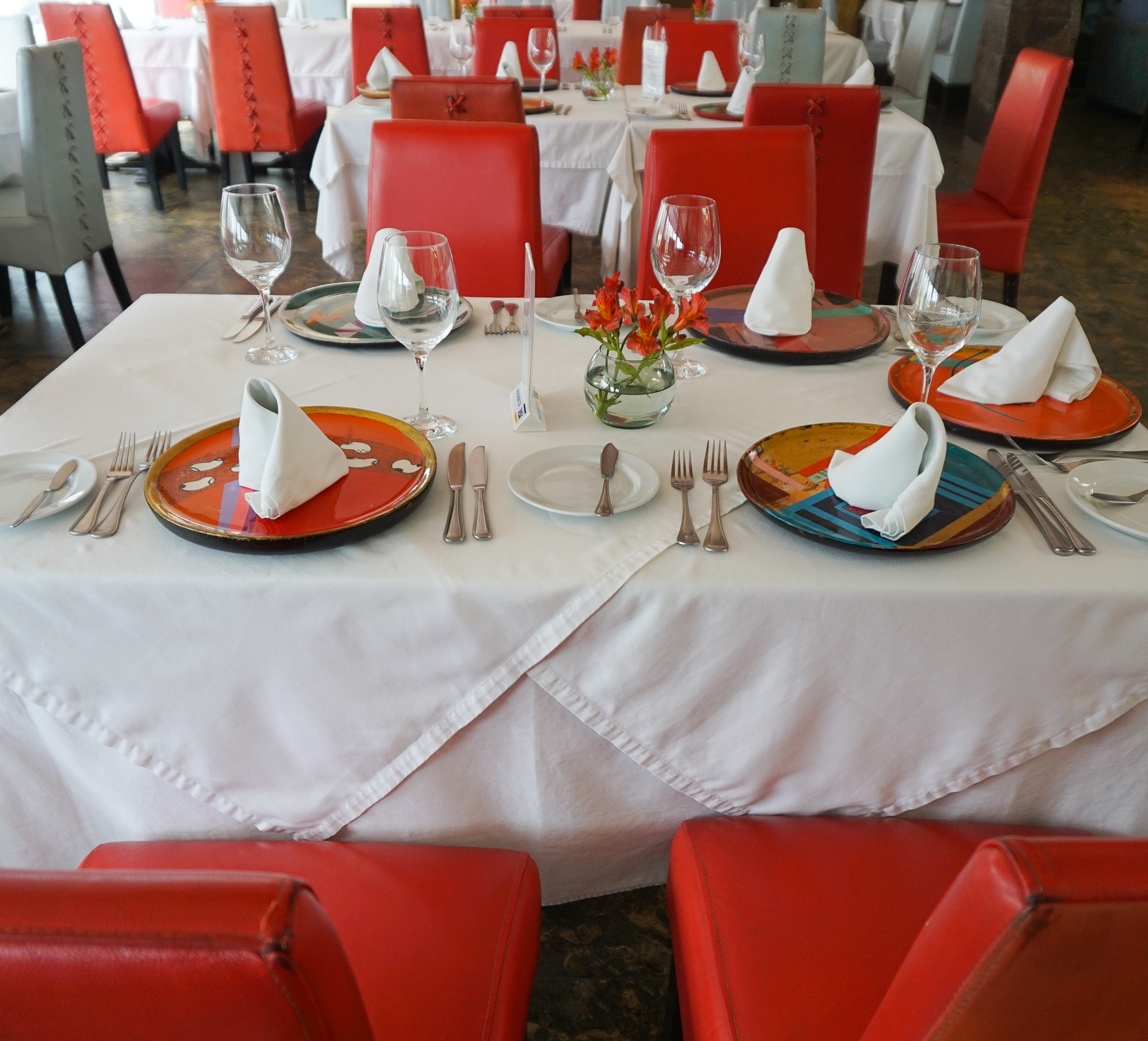 Although there were many restaurants right there we had lunch reservations at restaurant in another location and soon it was time to go for lunch. It was too far to walk since we had limited time for our agenda so we got a taxi from the lineup in front of Larcomar. The driver was very pleasant, spoke English and wanted to make sure we had reservations as that restaurant apparently can be busy. We assured him the we did and asked him to come and pick us up after lunch at a certain time. When we arrived at the restaurant we had some problem with the correct change. I was going to give him the extra money anyway and to my amazement he said no, that since he is coming back to pick us up after lunch we can pay him then. We ended up keeping him as our driver for the entire day, he dropped us off and picked us up on a pre-arranged schedule and did not want to get paid until the end of the day when he took us back to Plaza Salavery where we caught the shuttle back to the ship. I made it worth his while, he was a good driver, reliable, pleasant and gave us good information along the way. 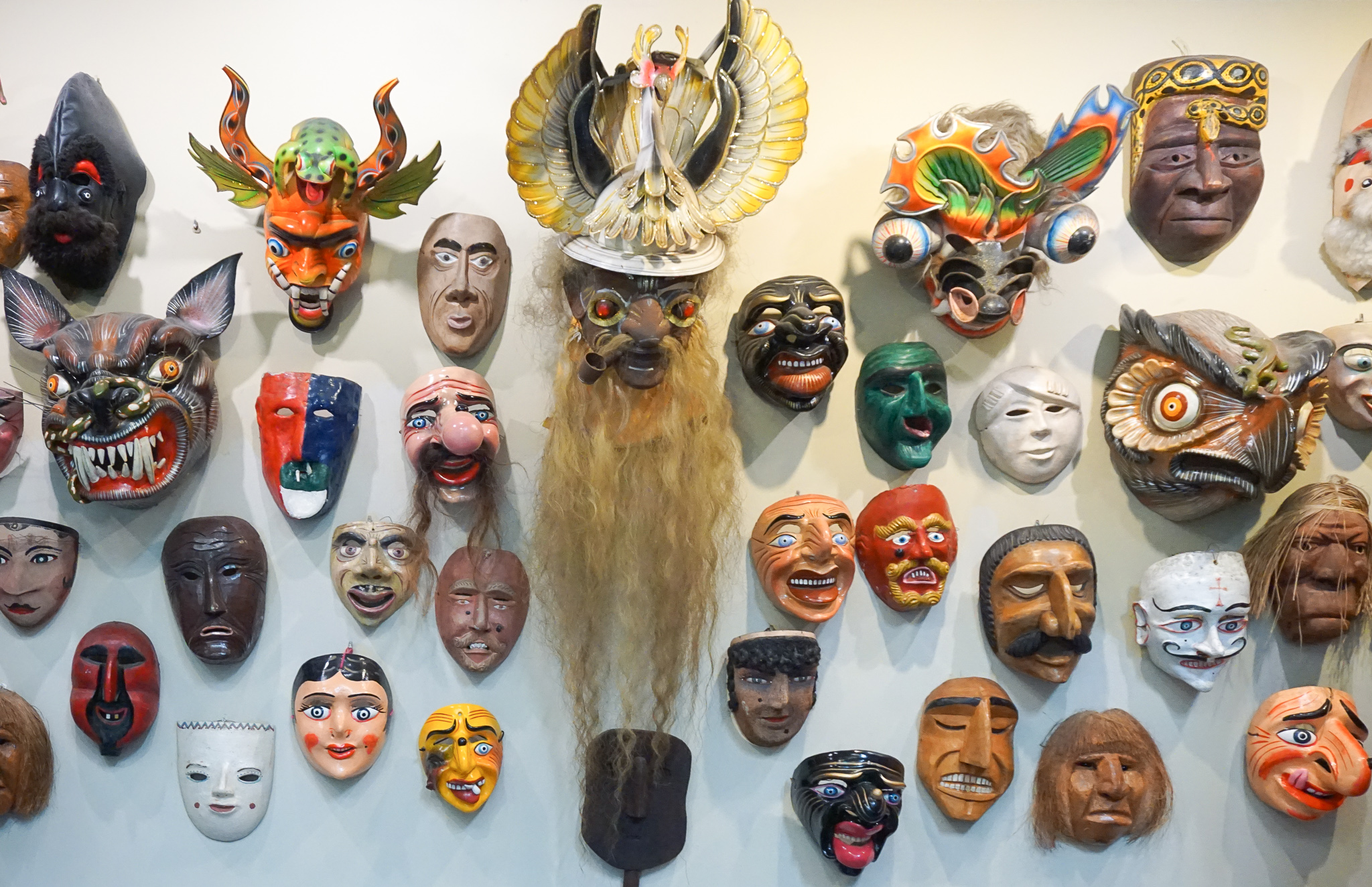 The restaurant, El Señorío de Sulco, was very interesting, as I expected. It was founded by Isabel Alvarez, a sociologist, culinary historian and author who is known for her research of pre-Colombian and Peruvian regional food traditions. She opened the restaurant with her mother Julia Novoa with the goal of reviving Peruvian cuisine with respect to traditional flavours and ingredients and is considered a culinary icon in Peru. The original restaurant was opened in the 1980s in Sulco in the old city and has since been moved to its current location in Milaflores. Her son, Flavio Solorzano has taken over as the chef has become well known as a culinary icon in his own right for his own interpretation, preservation and innovation of Peruvian cuisine and for preserving his mother’s legacy. One lunch was not going to get me immersed in the cuisine but that’s all the time we had. 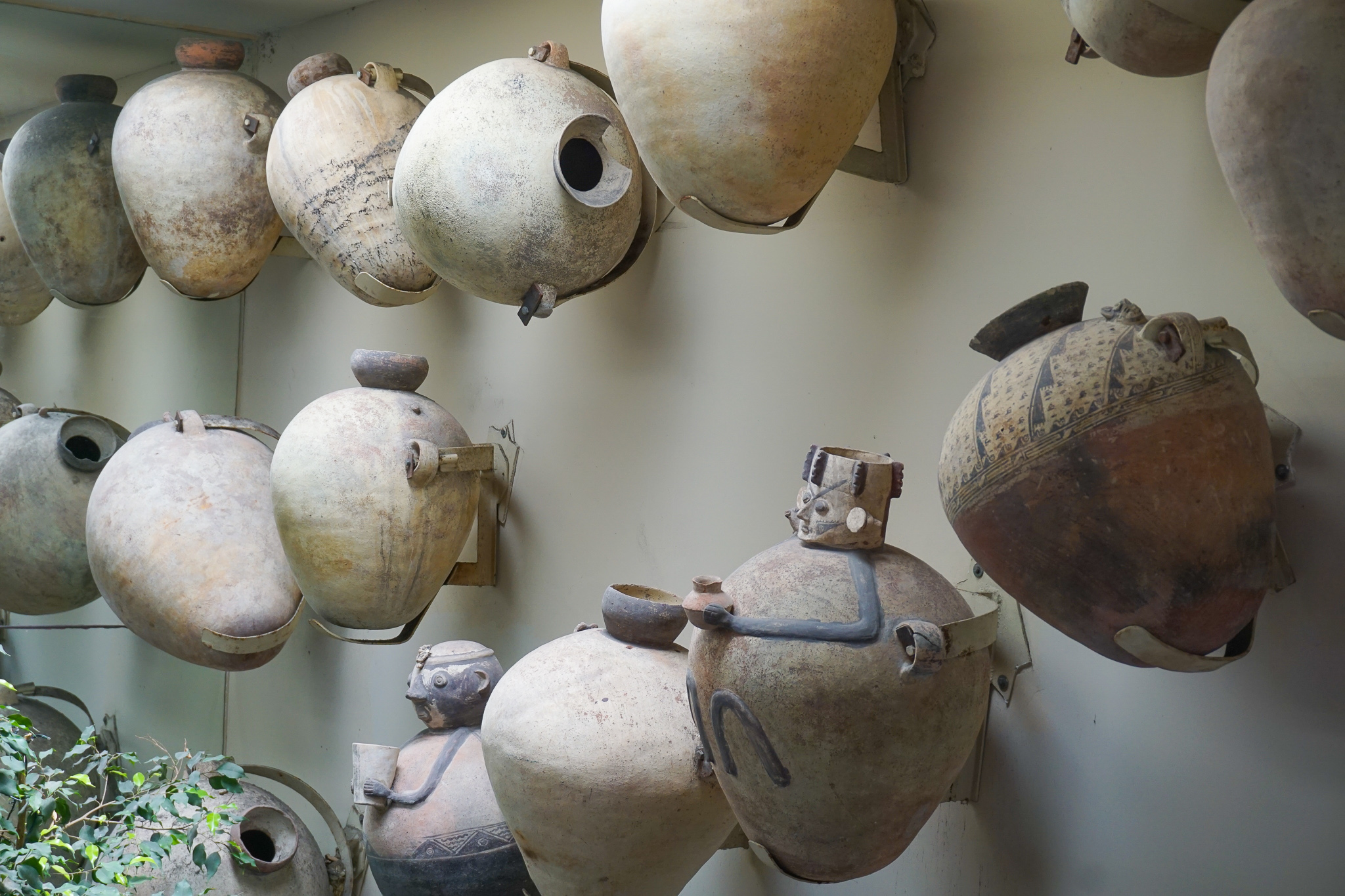 The bright second floor dining room (one of three) is set with beautiful tables and artisan-made oversized plates at each place setting. Going up along the open staircase you view a wall covered with pre-Colombian pottery and another with religious masks. We settled at a table in the cooler part of the room where the air conditioner was working and ordered, what else, a pisco sour to get us started until we figured out the menu. Pisco sour is the drink to have in Peru, although you find it all over South America. It is made with Pisco, a grape based un-aged brandy, lime juice, sugar syrup, bitters and egg white. Pisco is made from different grape varieties, giving it a different character depending how it was made.

We ordered a variety of dishes, all beautifully served and most quite delicious. I was looking to try the Causa, a traditional Peruvian potato “dough” made with mashed potatoes, so for first course I ordered Causa Rellena Con Pulpa de Cangrejo, a dish that looks like a mashed yellow potato cake topped with avocado and crab salad. We also had Grilled Prawns with Patacons (plantain cakes) and coconut-chilli sauce. For main we had Lomo Apanado con Tacu Tacu, a traditonal dish of beans and rice topped with beef tenderloin and served with bananas and fried egg. Another dish was Asado Limeno, a classic Peruvian dish of beef cooked slowly in tomatoes and red wine served with puree of potatoes and sautéed mushrooms. For dessert we shared Picarón Clássico, a traditional dessert of hot and crunchy dough of sweet potato and spices, deep fried and served with homemade maple syrup. I should have taken better pictures of the food but I was too excited to keep it all straight. The restaurant filled up pretty quickly and at the table next to us sat a group on a food tour and I was glad to know my choice of restaurant was one that is included in local food tours. They actually shared some of their tasting menu dishes with me once they noticed my enthusiasm for food. Peruvian food is very unique and deserve its own post and some recipes, coming up soon. 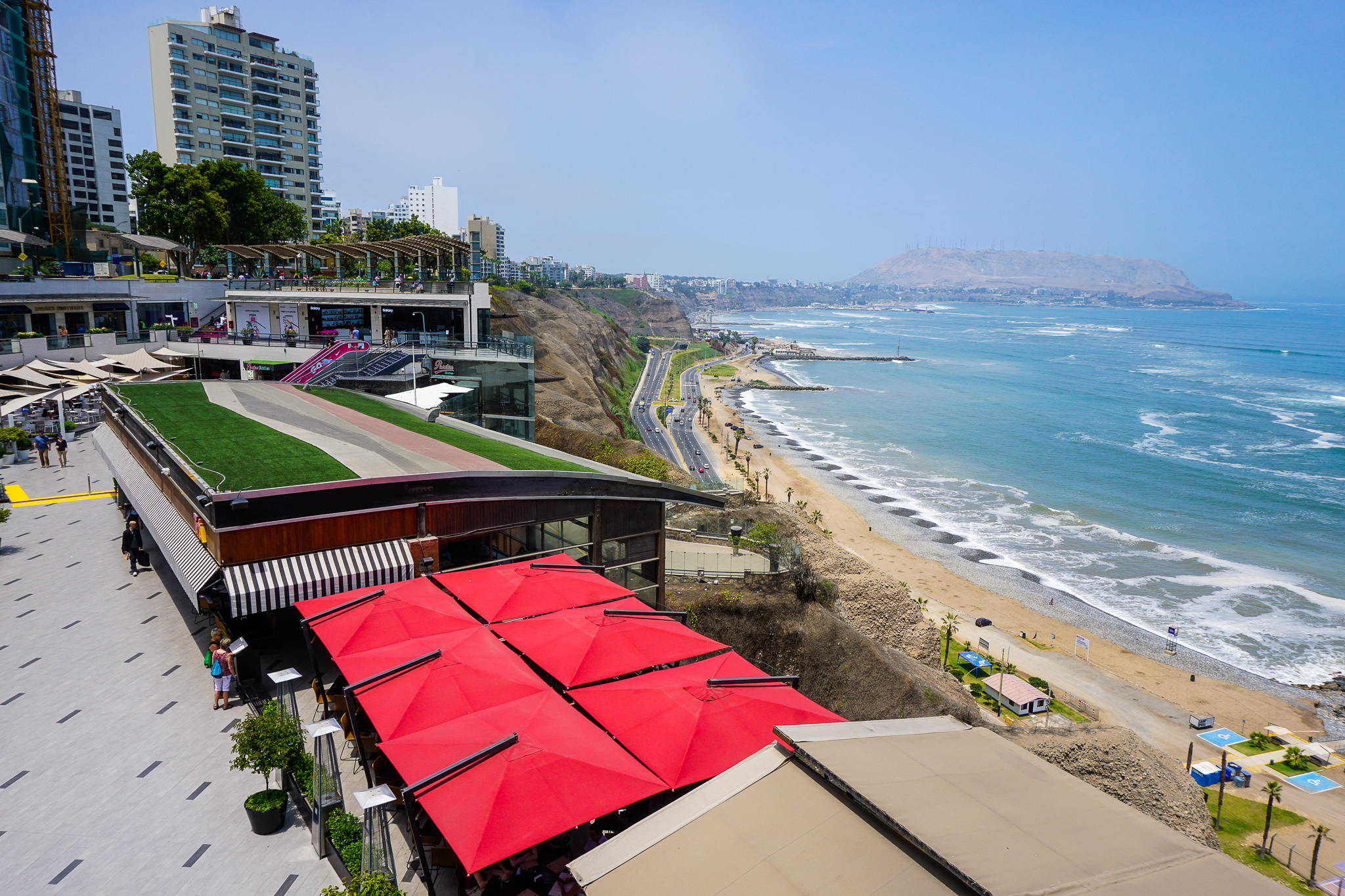 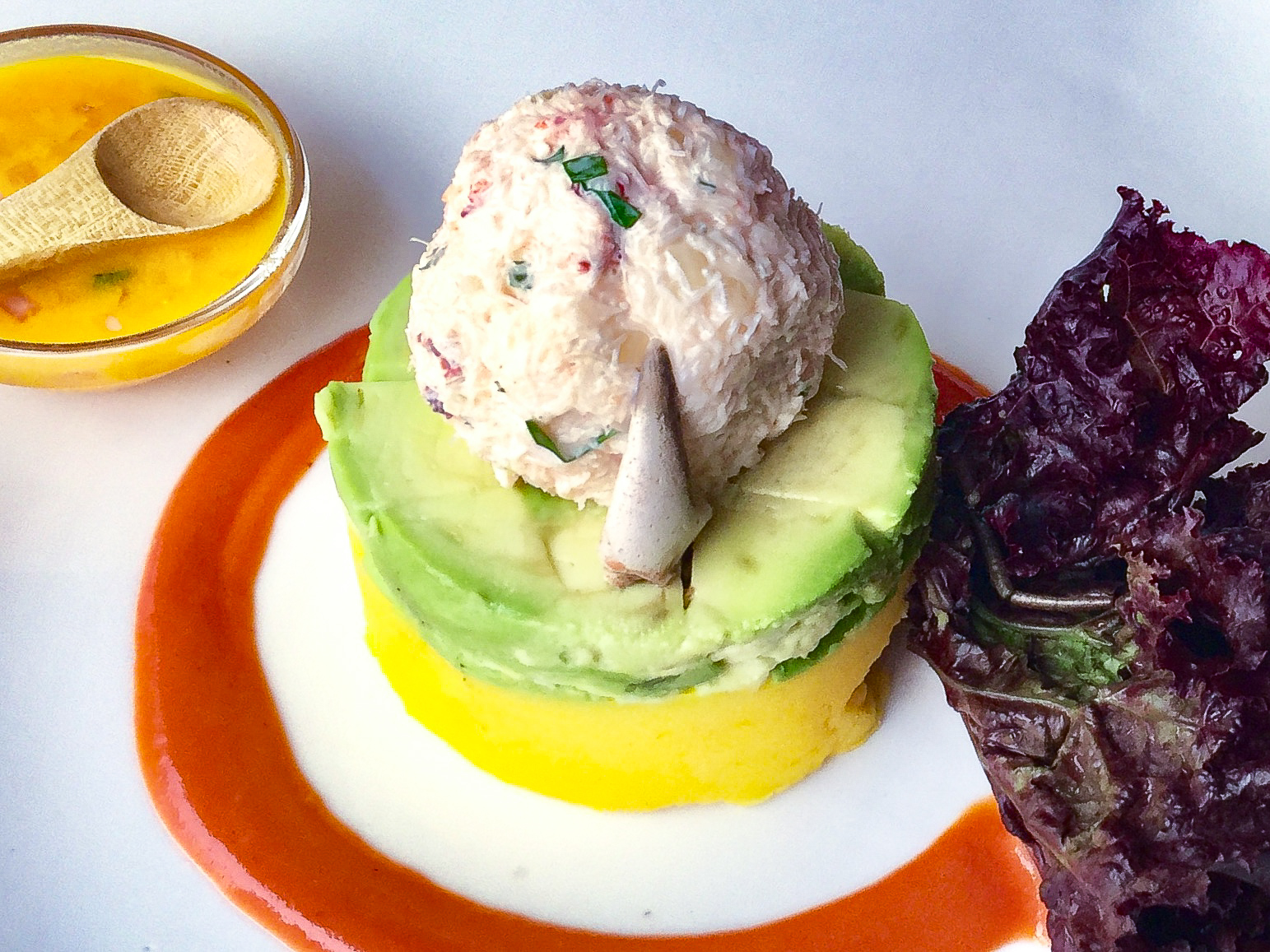 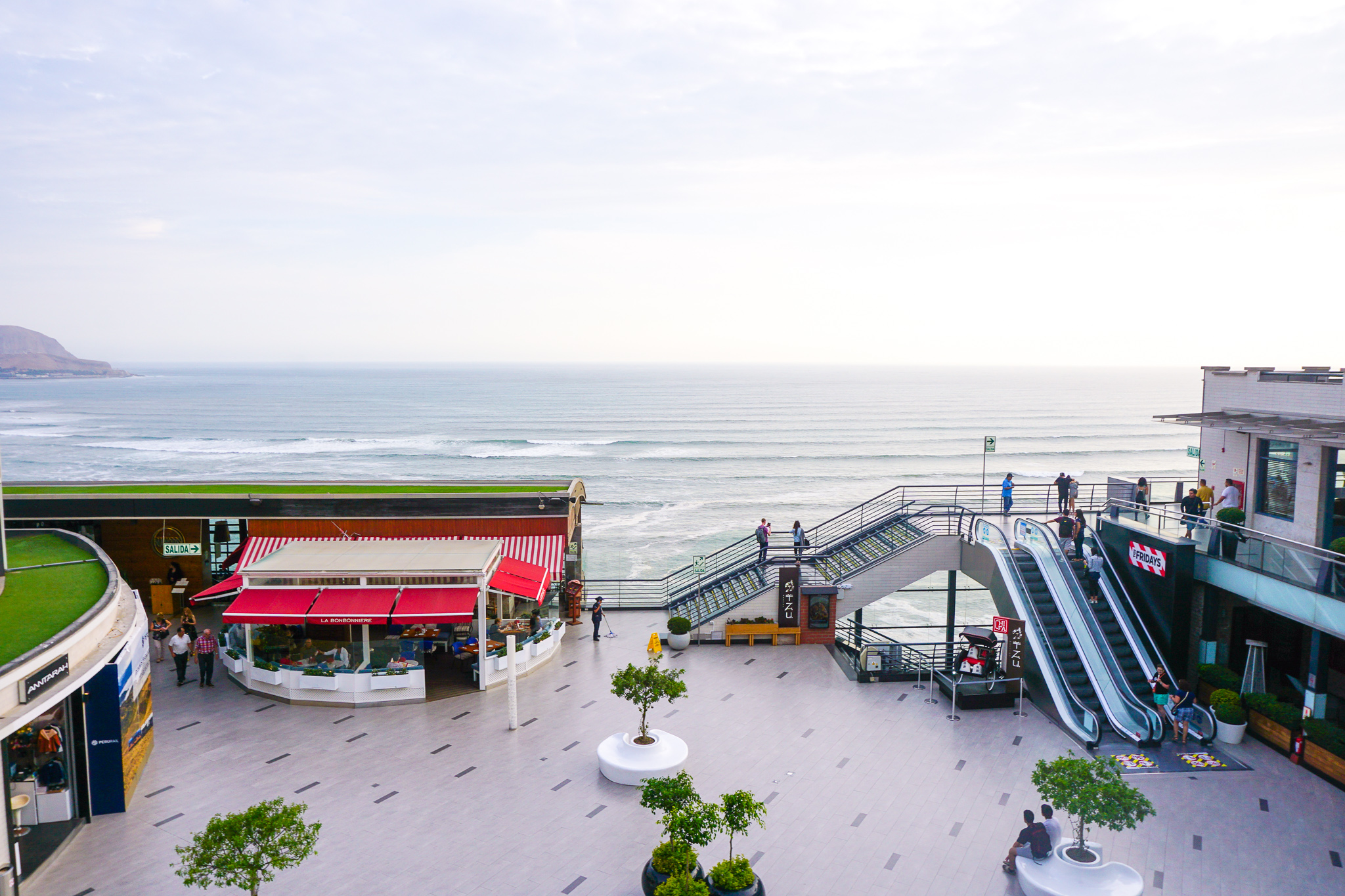 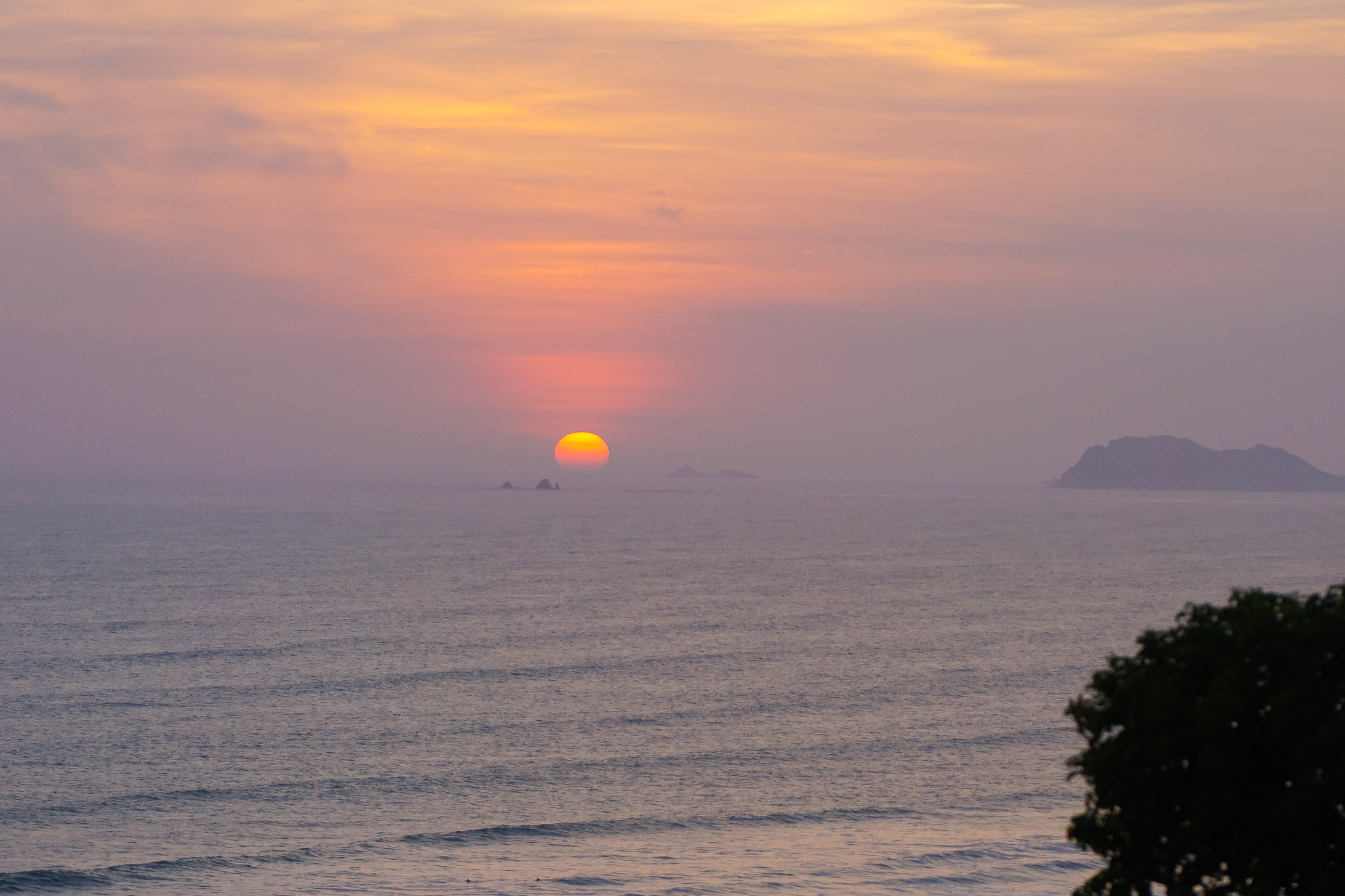 Sunset from the clifftops at Larcomar, Milaflores, Lima