I have written about Sunshine farm before here and here and wanted to share the lovely experience we had this weekend at the much anticipated annual Tomato Festival held at their farm. Each fall Jon and Sher Alcock and their family host a tomato festival on their organic farm, opening the doors to local foodies and food enthusiasts who snap up the tickets to the sold out event. The festival is held in their front yard, among fields of vegetables, chicken coups, barns and an amazing kitchen where Sher and her daughter Mona prepare the food. A large outdoor wood burning oven is manned by Jon Alcock and this year was also attended their son Russ. A long wooden table sitting up to 16 people is set under cover and we have many delectable memories of dinners and lunches at this table. 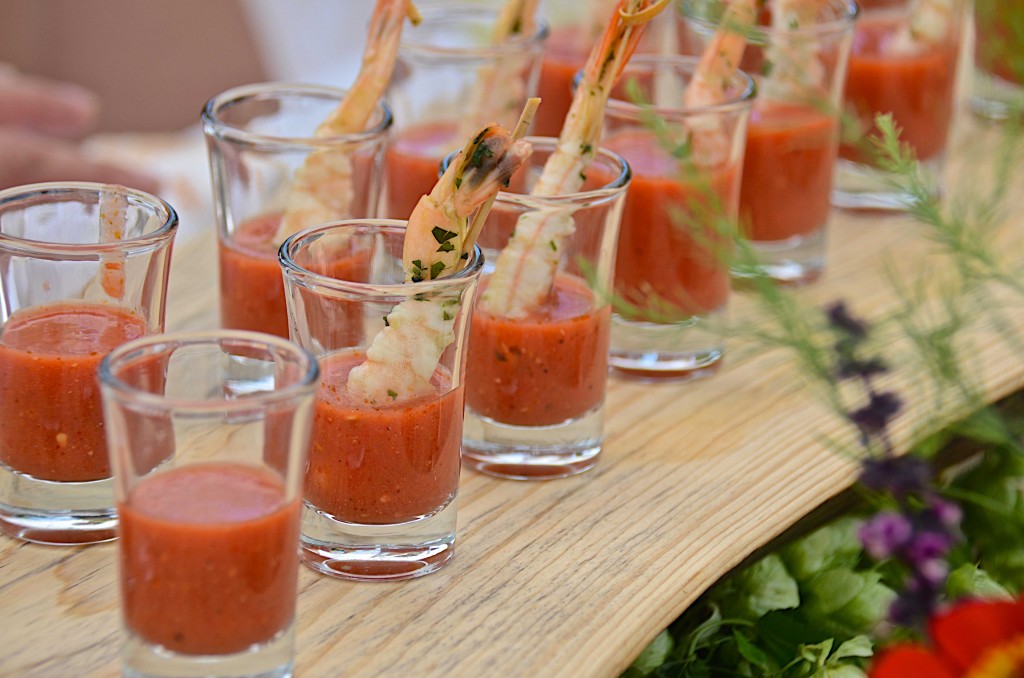 Sunshine Farm, situated in South East Kelowna, stretches over rolling gardens, meadows, mowlands and ponds. Run by Jon and Sher Alcock and their family, the farm is an intimate, hands-on operation that takes pride in quality and preservation and specializes in heritage rare and organic seeds from which they grow their produce. The Alcocks bought the farm in 1987. “We wanted to raise our children on the farm” says Jon Alcock, “I have been involved with food production for a long time, having been a fisherman before. I love having control over my food”. And having control over his food he does. We walked with him along the vegetable patches as he picked slender carrots of every colour, destined to join their farm grown potatoes at dinner tonight, roasted to perfection in their outdoor wood burning pizza oven. Food doesn’t come any fresher or more pure than that.

We have gotten to know the Alcocks and their children over the last couple of years and love the whole concept of their operation. You can buy their outstanding tomatoes and other produce at the Kelowna farmers market. Early in the season you can go to their farm and buy herbs for your own garden.

Upon arrival we were handed a glass, a linen napkin and a plate and invited to fill them with the foods and drinks prepared by the family and set in stations about the property. We first stopped at the large and tantalizing display of some 20 varieties of heirloom tomatoes both showcased whole and cut up for us to taste. The colours, textures and flavours were unique to each tomato and it was hard to pick a favourite. The speckled Roman tomato? the deep orange Tangelo? the dramatically black indigo rose? I don’t know. I loved them all.

After tasting, examining and photographing the wide variety of heirloom tomatoes on display we were ready to taste the rest of the tempting foods offered at the various stations on the grass field. Mona’s tent had a large selection of beautiful and delicious fresh tasting finger foods and we kept going back there again and again and again. No worries, there was plenty of food to go around. The Alcocks cook with their hearts. 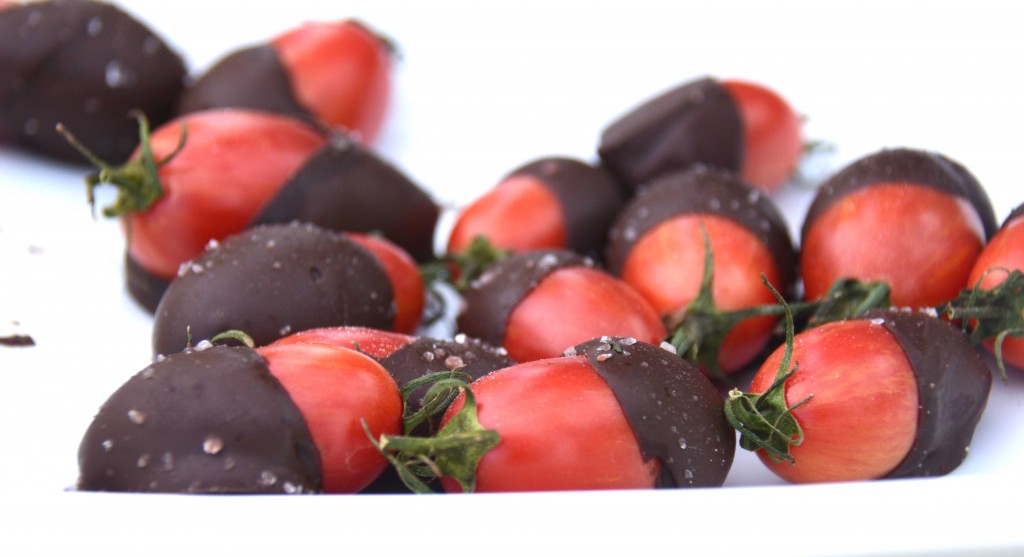 Mona’s tent featured several appetizers including Fiery Red Gazpacho with citrus marinated prawn that was served in small shooter type glasses, fried chickpea balls that were delicious with tomato marinara, bruschetta made with their own unique wild yeast sourdough bread and for me the piece de resistance, Mona’s chutney made with un-riped green tomatoes and sharp cheddar spread – outstanding. Thank you Mona for the jar of the chutney that came home with me.

The pizzas as always were a special treat, crispy crust topped with farm fresh tomatoes and local cheeses. The oven was heated to almost 500F and just before removing the pizza from the oven Russ or Jon, whoever was manning the oven, would lift the pizza on the peel close to the roof of the oven where the heat was close to 600F, to give the topping a quick baptism by fire. I loved standing and watching all this unfold. 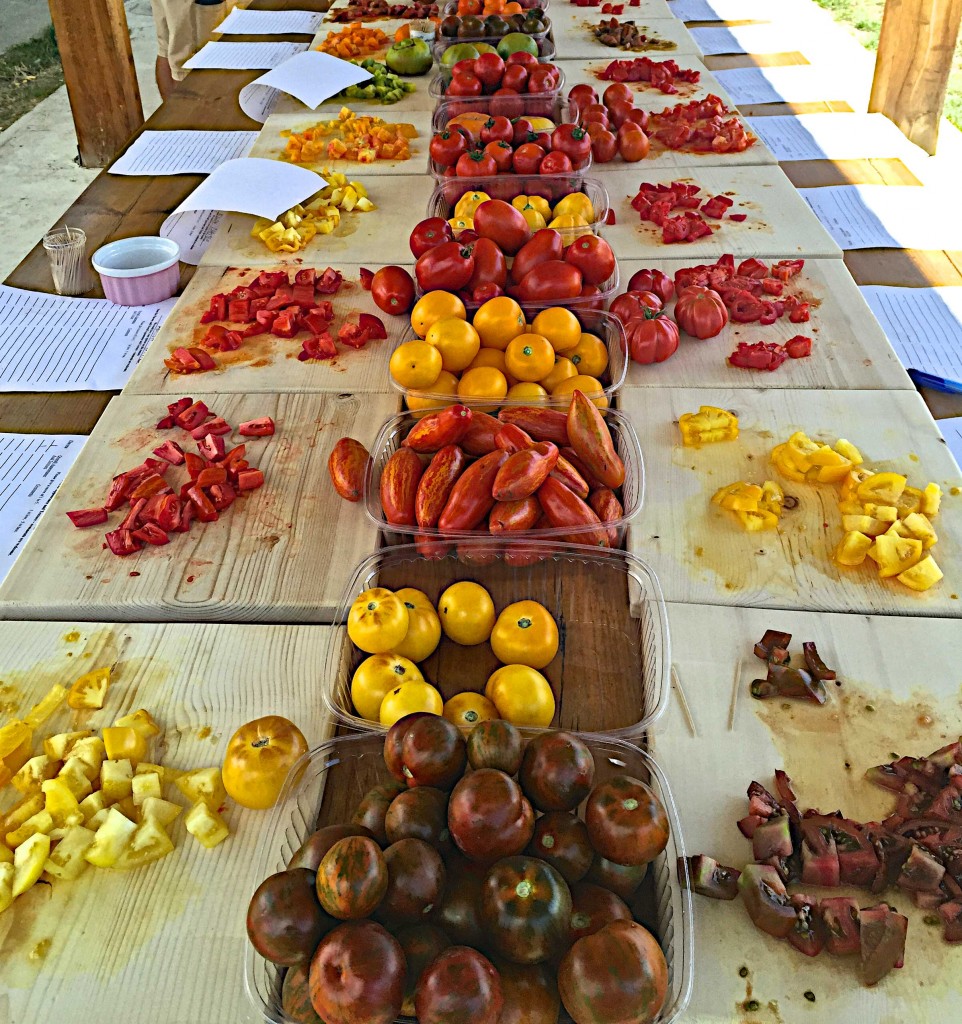 The “something different” table had a few unusual selections that you may not find available to taste or buy. One of these was Spilanthes cress, an herb and flower head that was served with cucumber or tomatoes. This left your mouth tingling for quite sometime and is said to stimulate the appetite. It must have worked with us because we made several trips to each food station. They also had green sauce made of ghost peppers and served over chopped tomatoes. Ghost peppers are supposed to be one of the most fiery varieties out there but it worked in this green sauce perfectly, cooled down by the tomatoes and cucumbers.

Brianna’s tent had the desserts, all made with and featuring tomatoes and the surprising combination of chocolate and tomatoes was an eye opener. Chocolate dipped teardrop cherry tomatoes with sea salt, dark chocolate tomato truffles with basil, black salt and hot pepper flakes and a cookie with tomato cream had us standing around lingering near the tent for one more bite for quite a while. 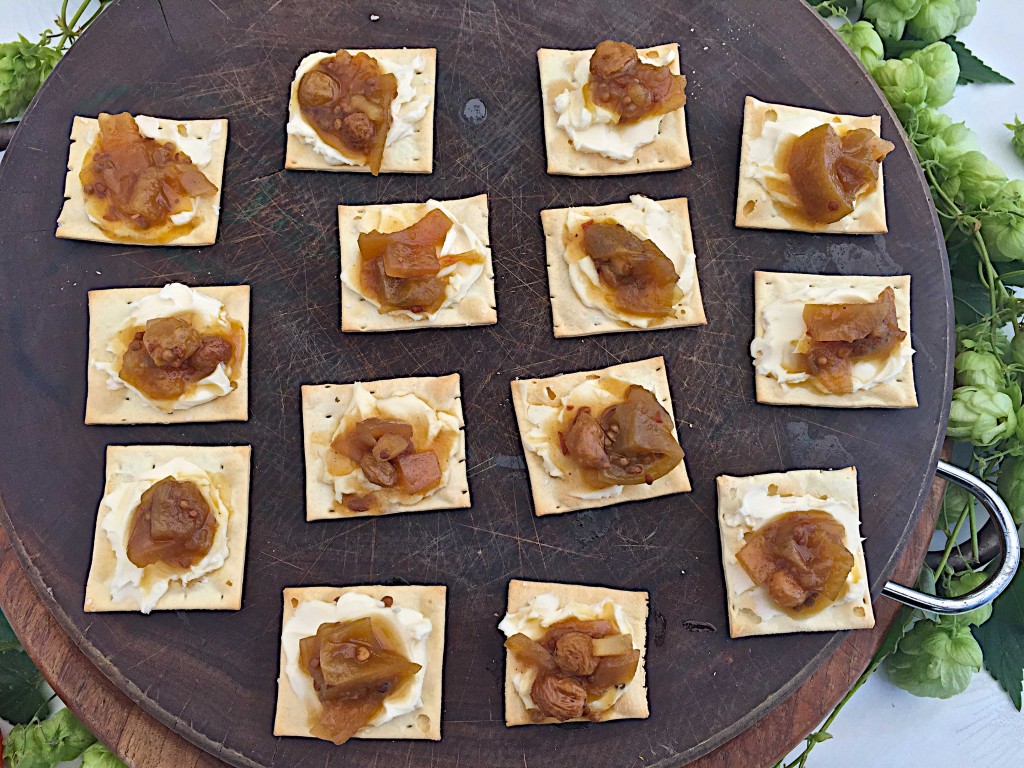 We settled at a table in the field set with white linen and fresh flowers from their gardens and enjoyed the food, the setting, the company and conversation. I can’t forget to mention the music. For two years in a row the Alcocks have invited their friend Cowboy Ted to sing beautiful and engaging country music under an apple tree in the yard. As the afternoon progresses we usually pull the chairs closer and gather around Ted and are treated to a private concert with beautiful music and inspiring lyrics, mostly composed and written by Cowboy Ted himself. His presence and music is part of what makes the event memorable.

As is often the case, my friends Val of More than Burnt Toast, Laura of The Culinary Travel Guide and I were the last to leave. We love these events at Sunshine Farm and hope they are able to continue this tradition in the future. In the meantime, I can’t wait for the Saturday market where I can pick up another box of their delicious and unique selection of heirloom tomatoes. I can think of a thousand recipes to use them in. 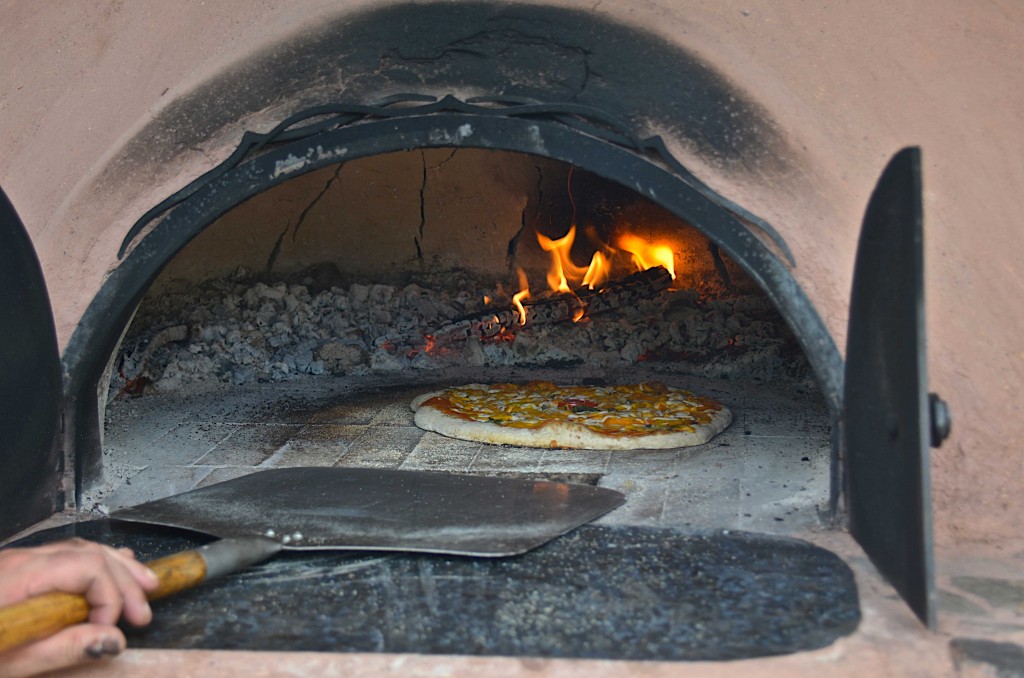 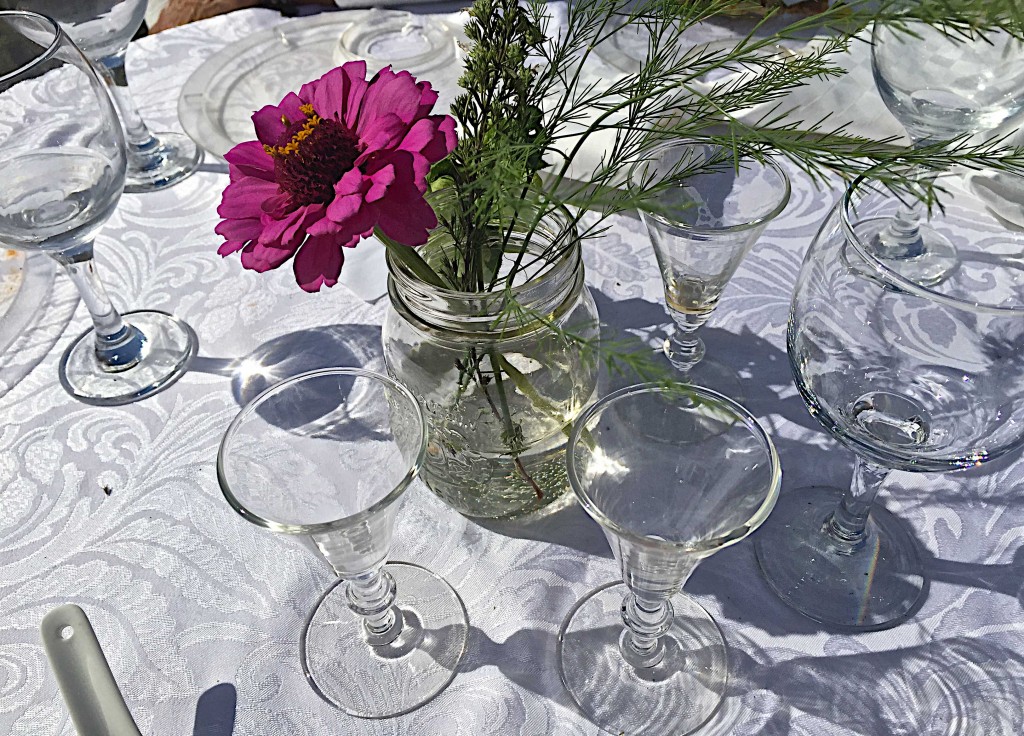 Tables on the farm 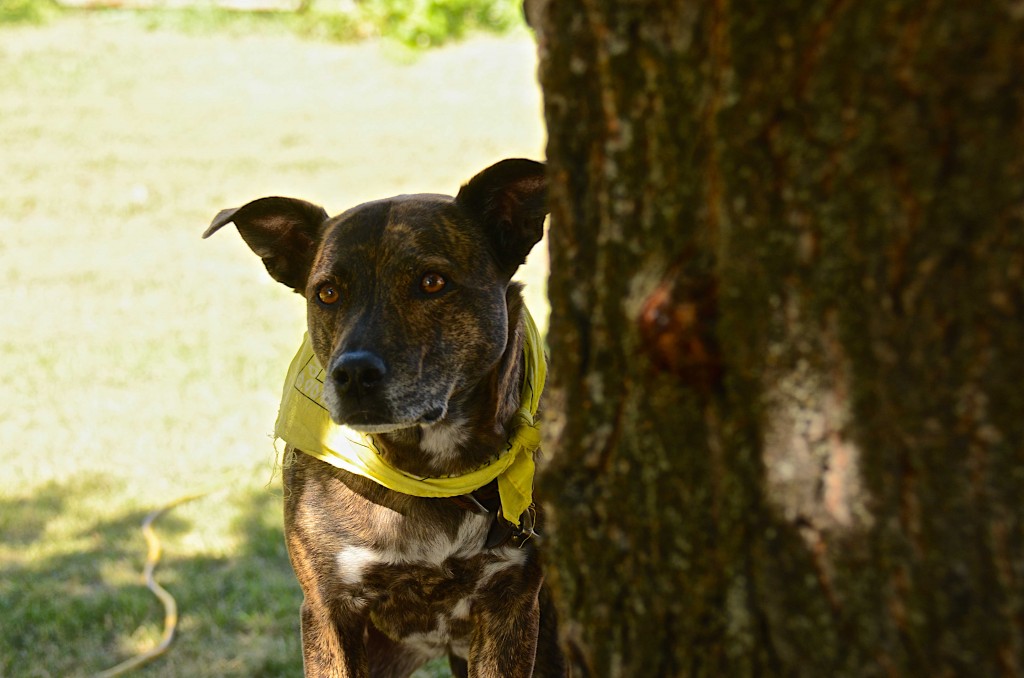 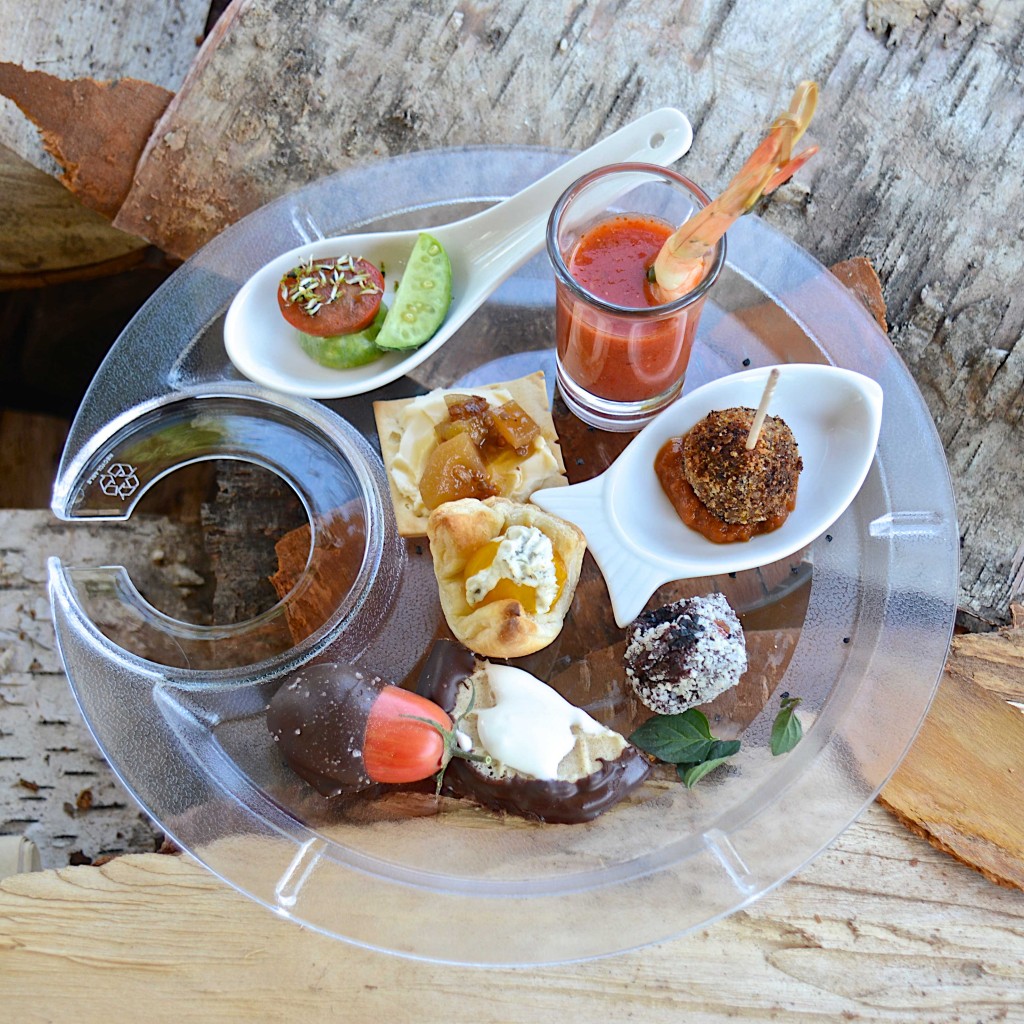 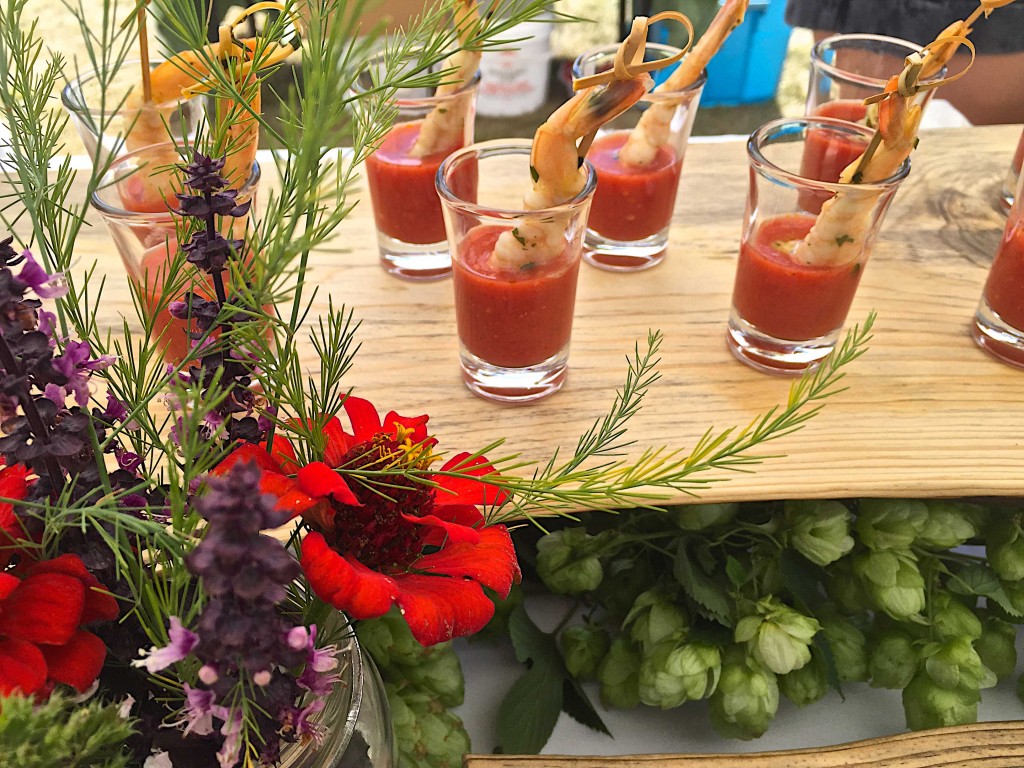