We woke up at our charming Cannery Pier Hotel in Astoria at 6:00 am.  I left the windows slightly open at night so I could hear the rushing river below and that was the first sound I heard when I woke up. We decided to walk along the boardwalk into town for breakfast, a short 7k return from the hotel. I had a place in mind for breakfast, Blue Scorcher Bakery & Cafe, known for its bread and vegetarian breakfasts and lunches. When we travel I am always on the lookout for oatmeal for breakfast and I was hoping to find it there. Breakfast was included in our hotel room charge but it was a continental style breakfast and nothing that particularly interested me. We can come back there for coffee afterwards and enjoy the gorgeous view.

The boardwalk in Astoria is right along the mighty Columbia river and adjacent to the trolley tracks. The trolley begins running at noon so we had the boardwalk to ourselves except for the occasional early riser in this sleepy town of merely 10,000 residents. The town feels a little bigger probably because it caters to the many tourists that frequent this beautiful area. 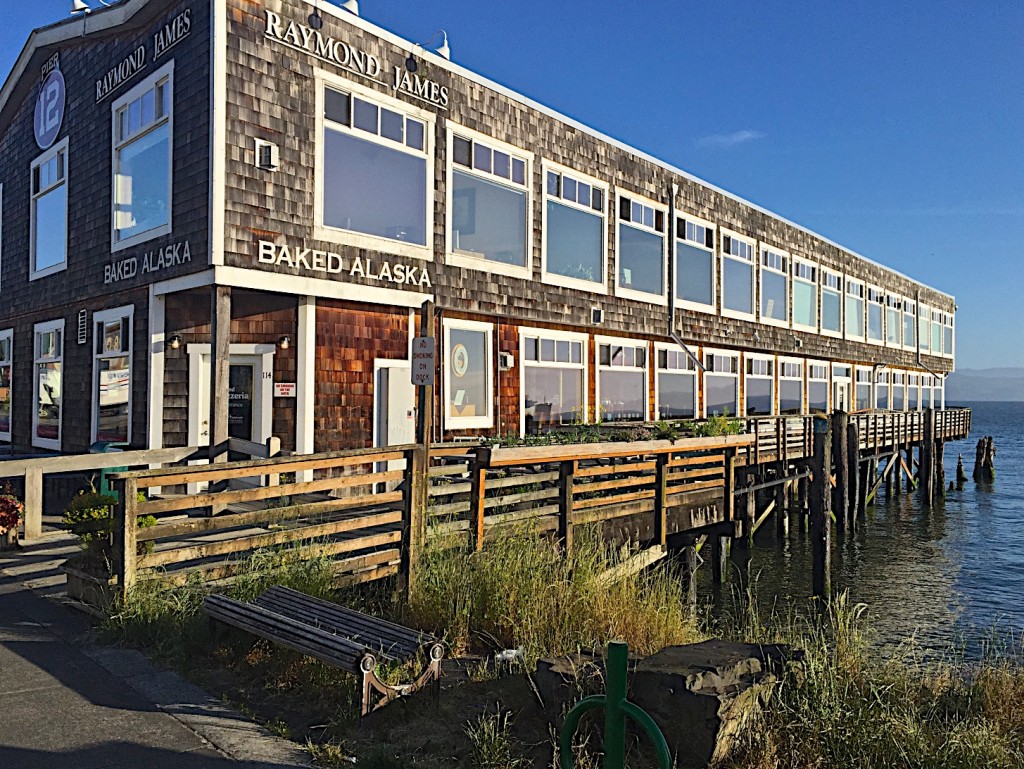 The boardwalk takes you past a number of the old piers, now rebuilt and made into restaurants and other businesses. Pier 11 and pier 12 house some of the popular restaurants and I wish we had more time to try them. Baked Alaska in pier 12 and Feedstore and restaurant at pier 11 have reputation for good food.

Everything was of course closed this early in the morning and frankly I was surprised to find Blue Scorcher open. It is located between Commercial and Marine drive on the east side of downtown and thankfully had an “open” sign displayed on the sidewalk. Scorcher is an ten member worker Cooperative that took over the management of  the Blue Scorcher Bakery in 2012. It has a pleasant, casual slightly cluttered feel. Loaves of crusty breads lined the shelves and freshly baked pastries and croissants were displayed behind the counter. The best thing of course was that they had a pot of Irish oatmeal simmering in the back almost ready to be served. 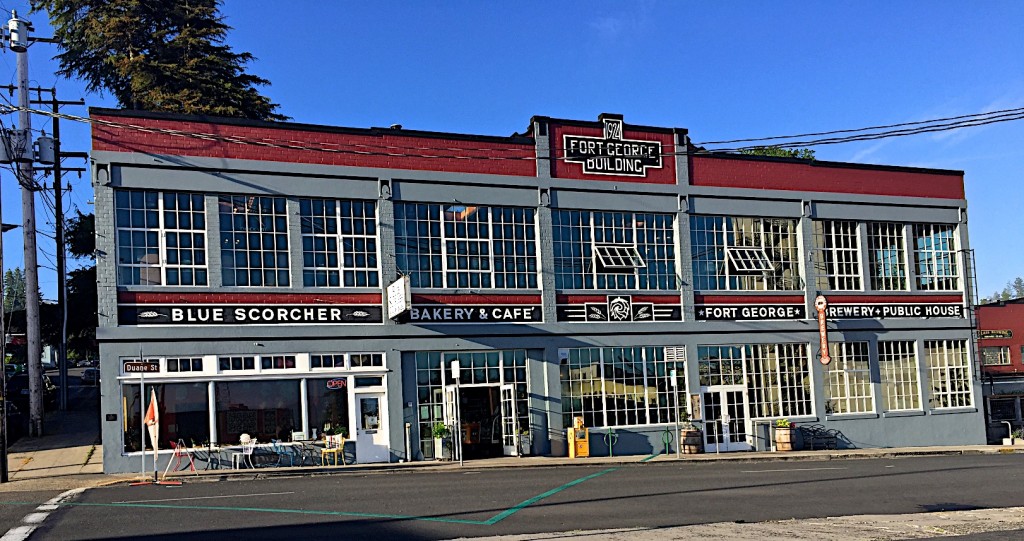 We placed our order and settled at the counter overlooking the street and browsed through the selection of magazines while our order was being prepared. I found one special publication called Rain that contained writing by local authors in which the river played a major theme and I was swept away by a poem written by John Hagerty, a local who worked in the charter fishery and nearly drowned three times in the large and fast flowing Columbia river.

The river calls out ‘come’
Come out away from shore
You can see the other side
You can feel the ebbing tide
Come out where the mouth is wide
Come out, come out, more.

The river calls out ‘come’
The day is hot as hell
The current seems so soft and slow
It’s all so quite, there below
Where there are secrets you can know
But you will never get to tell 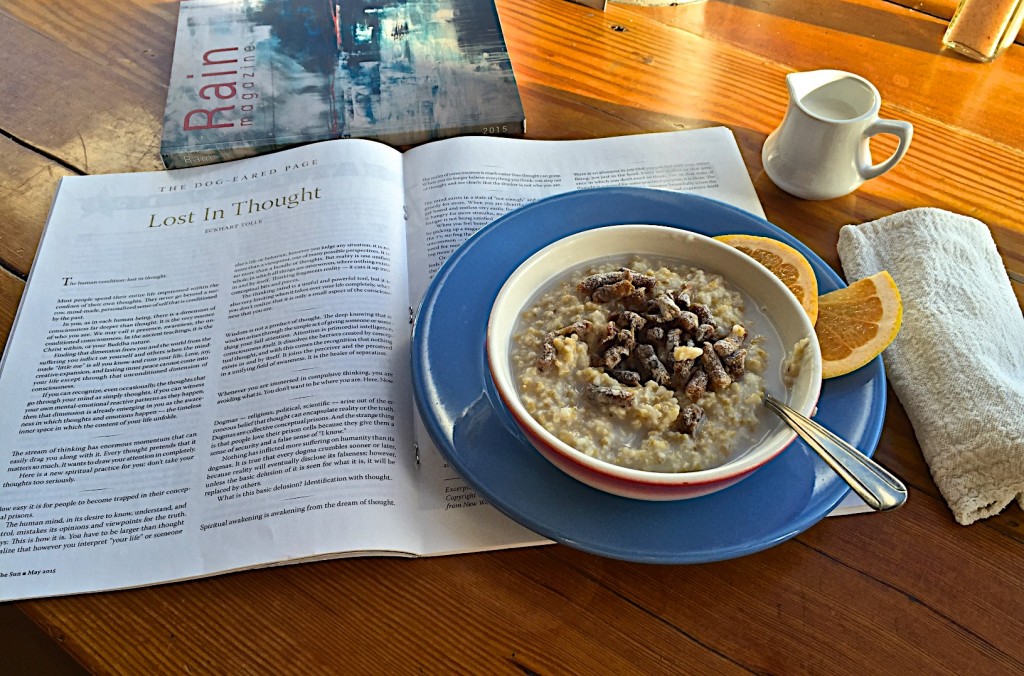 Our breakfast soon arrived and we enjoyed the food and the setting leisurely before heading back on foot via the boardwalk to our hotel. We took our time departing but eventually were in the car and on our way south on route 101. The few small beach towns that we wanted to visit were clustered close together in the north part of the Oregon coast.

Seaside was the first beach community, small and quaint with a lovely beach promenade built along the vast sandy beach. Private home with beautifully landscaped front yard line the boardwalk and are fun to look at.

Next town is larger and more trendy Cannon Beach. It is known for the large rock formation jutting out of the water very near the beach. Hotels are built practically on top of each other and I assume that in season this is one big party town. There are several restaurants and even a cooking school in Cannon Beach but it was too early for lunch and no time for a cooking class. Perhaps another time.

Next beach town is Manzanita, a cute and laid back town with one main street coming up from the beach where all the restos and shops are located. We tried to stop for a panini and a bakery that was on my “list” (Bread and Ocean Bakery) but unfortunately it was closed that day. We ended up in a Mexican restaurant but I should have known better. When does a person learn not to stop in these kind of places? I guess I always hope that it will be good. It wasn’t.

Beach houses along the Oregon coast

Next stop was the town of Tilamook, known for its Tilamook cheese production (cheddar). We visited the cheese making facility where we could taste and buy the various cheeses and watched through glass windows how the ready cheese is being processed. It’s interesting but a very commercialized operation meant for tourists. There are smaller cheese producers that may have been more interesting to visit.

The views along the way were quite spectacular, especially from high above when the road climbed up the hills. The views from above Cannon Beach were quite memorable but a profusion of electric cables prevented me from taking a clean picture from our vantage point. The road winds in a lush green forest that often closes up above you tunnel-like of tall trees and gorgeous foliage. When you are not in the forest you get gorgeous views of the water and the rugged coastline. Homes are built at beach level or higher up on the cliffs. I would have loved to be invited in to see what it’s like to live in this setting. I think renting a home along the coast is definitely on my “must experience” travel list for the not so distant future. 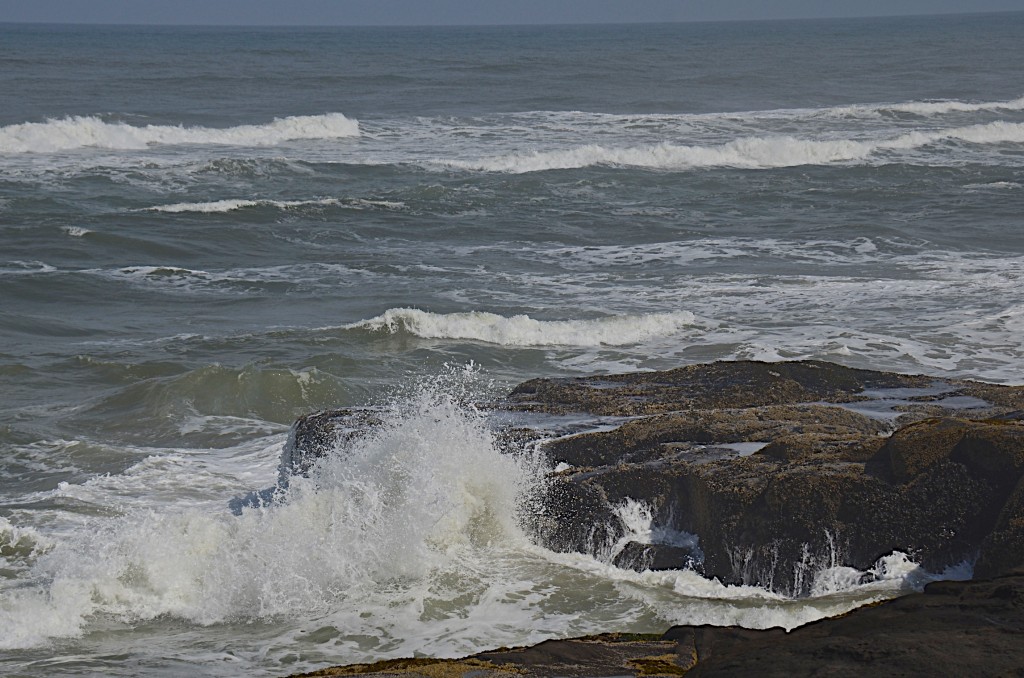 Yachatz – dark water at the foot of the mountain

After visiting the few small towns we pretty well drove without stopping intending to stay overnight in Newport. Once we got there we decided to keep driving for a while longer and look for a hotel along the beach. We found a resort style hotel on the beach in the next town (Yachatz, meaning dark waters at the foot of the mountain) and checked in there for the night. The hotel is situated on a cliff above a rocky shore that gets significant pounding by the waves. The cliffs above the water are quite fragile and the rocks by the water are slippery. There are rogue waves (called sneaker waves) that unfortunately claim the life of people who venture too close to the rough waters. 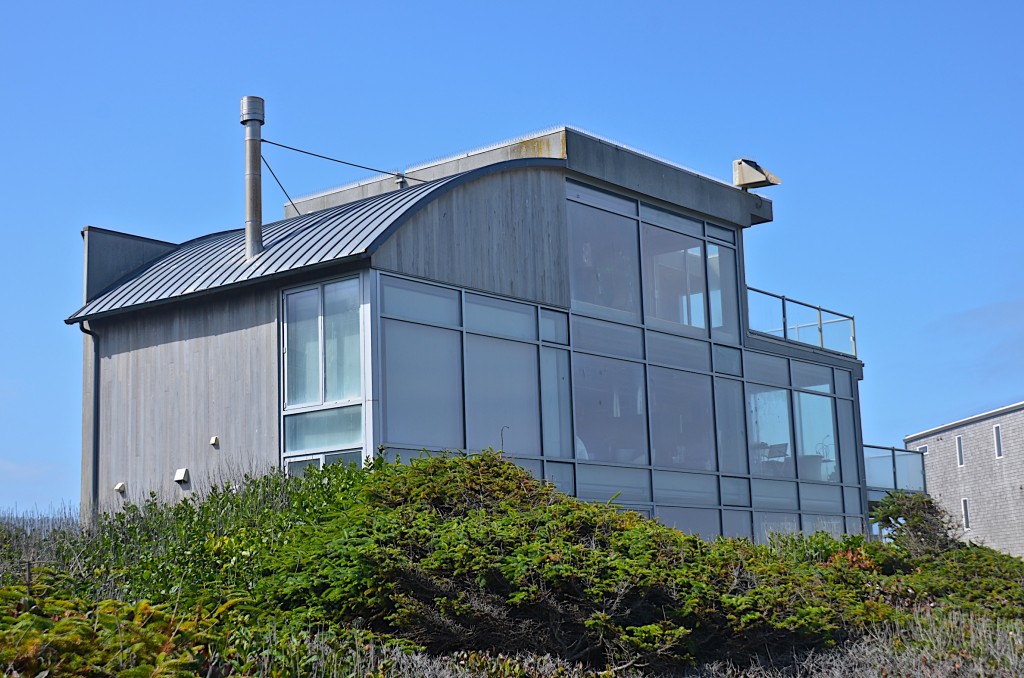 Beach houses along the Oregon coast

By the time we got to the hotel I was not in best form, perhaps because of the Mexican lunch or due to the winding road on which we have been driving. This translated in to going to bed without dinner but it seems to have done the trick and I woke up refreshed and feeling well in the morning. 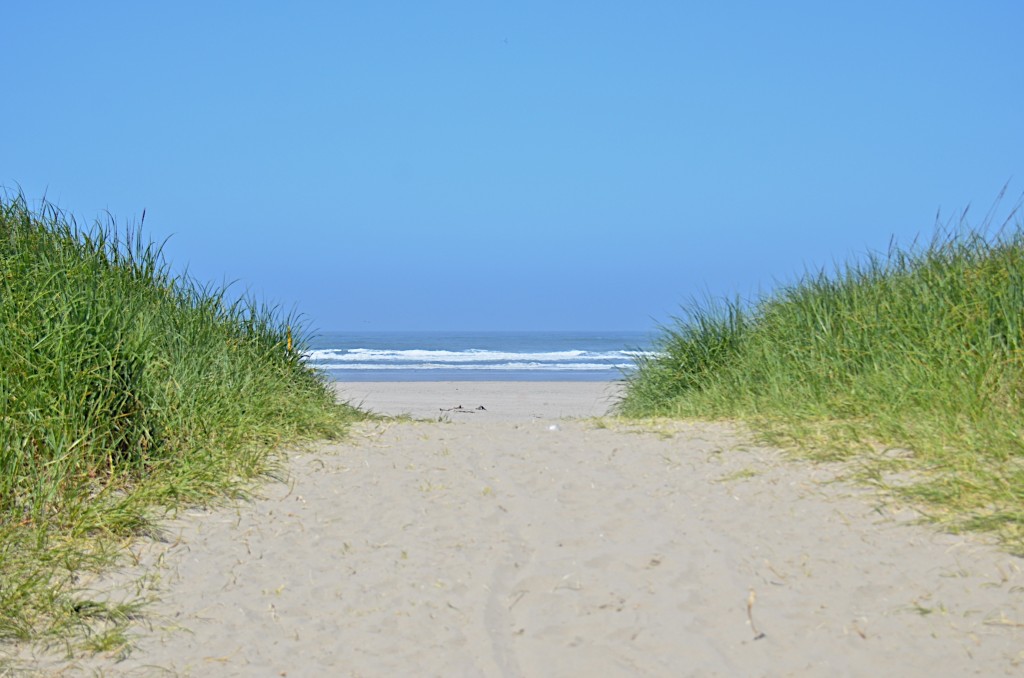 Path to the beach at Seaside 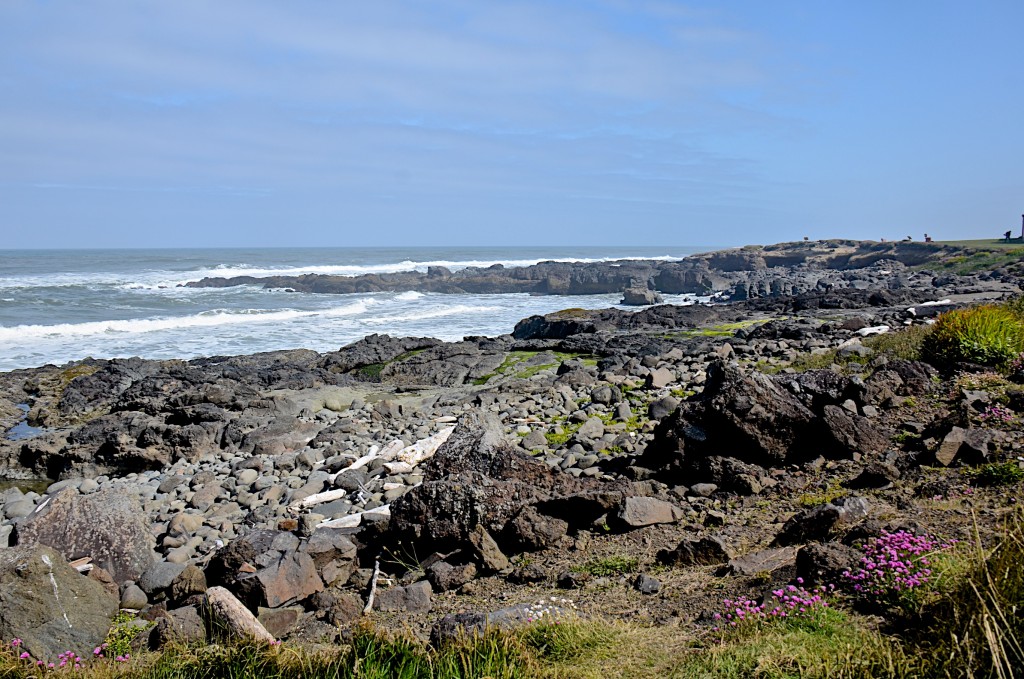 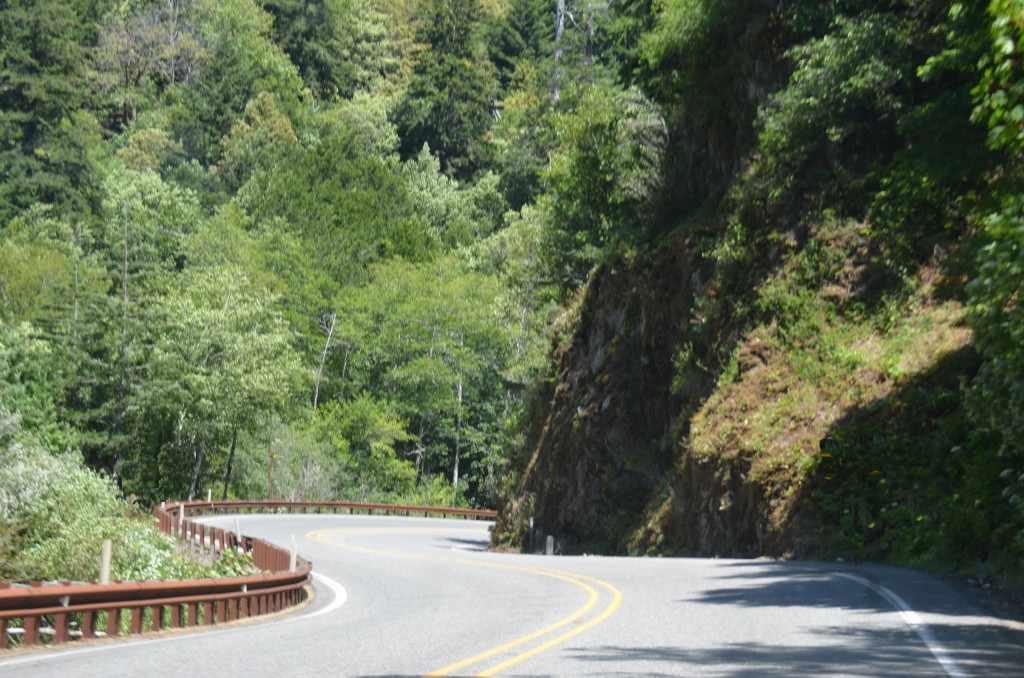 Route 101 winding along the Oregon coast